Chasing A Geisha In Kyoto

Adventure / Chasing A Geisha In Kyoto

I’m not sure about you, but one of the most important things for me when visiting Kyoto was to see a real-life geisha. Well my friends, let me tell you, I actually did - in fact I was so excited that I literally chased the poor woman down the road in order to take her picture. I know I’m crazy, (my husband was borderline embarrassed and totally mortified) but I was in the moment, disregarding cars, pedestrians and acting like a typical blonde tourist with a camera.

She shuffled her way down the busy street at maximum speed in her wooden platform shoes and bright silk kimono.

Don’t get me wrong you can see many geisha’s walking around the streets of Kyoto but these are mostly people dressed up as it’s a tourist thing to do – dress like a geisha with your hair and make up applied or people who are working in shows etc.

This geisha however, instantly took my breath away as she stepped out of a typical Japanese wooden house just a few yards ahead of me. She was not only striking and very beautiful and had not one strand of hair out of place, she was poised and petite and ever so elegant. She literally shuffled her way down the busy street at maximum speed in her wooden platform shoes and bright silk kimono, trying not to be noticed and trying to evade, avoid and escape from the crazy blonde girl.

Have you heard of the movie, “Memoirs of a Geisha” which is based on a famous book? While most of the movie was shot in the USA, some parts were filmed in the Gion District in Kyoto as this is where the main character lived. It has a famous bridge called Tatsumi Bashi which was also featured in the movie.

So, we didn’t visit Kyoto just for the geisha experience, there is actually so much to do in this enchanting, culturally rich city that was once the capital of Japan. From numerous classical Buddhist temples, manicured gardens, imperial palaces and Shinto shrines, Kyoto takes you back in time and tradition.

We took the bullet train from Tokyo to Kyoto which took 2 hours and 20 mins and costs 13,080 yen but if you are also traveling to the likes of Osaka, Mount Fuji, Hiroshima, I would recommend buying a Rail Travel Pass for convenience and to save money.

Once at Kyoto train station we managed to find a tour guide with who we negotiated a day rate and asked him to show us a few of the popular sites and to also show us a few hidden gems which are off the beaten path – away from tourists.

Our first stop was the Golden Pavilion "Kinkaku-ji". This zen like tranquil temple with a gold leaf facade set amid landscaped gardens and a reflecting pond is a must see as it exhibits and exudes the true feel of Kyoto. However there is a constant influx of tourists.

Another thing on our Japan to-do-list was to meet a real-life practicing monk, since we have become much more spiritually aware. We asked our driver to take us to a hidden temple which is not frequented by tourists and where we can see monks in prayer. He answered our request by taking us to this beautiful wooden temple set in large gardens which had many rooms along the path ways, the type of bamboo sliding doors you see in the movies - these were monks private rooms. We were lucky enough to bump into a monk who was leaving a temple, who offered to show us inside. He had a very calm and peaceful presence saying very little even though he didn’t speak much English. We said a little prayer, enjoyed the temple and left the monks to their work.

Friends who had visited Kyoto earlier that year had recommended for us to book tickets to watch a show at Gion Kobu Kapurenjo Theatre. The show lasts an hour and incorporates many of the Japanese traditions such as a Geisha dance, puppet show, a tea ceremony and musical. It’s a busy show with performances twice a day, so book tickets in advance. It’s a nice show which the kids would enjoy too.

Before heading back to the train station to catch our train back to Tokyo we enjoyed a great Kobe beef teppanyaki at one of the restaurants in the area.

All in all it was a really interesting visit to Kyoto, some people stay for a few days, but I felt like I had achieved what I wanted to do and I had so much more to see and do in Tokyo. 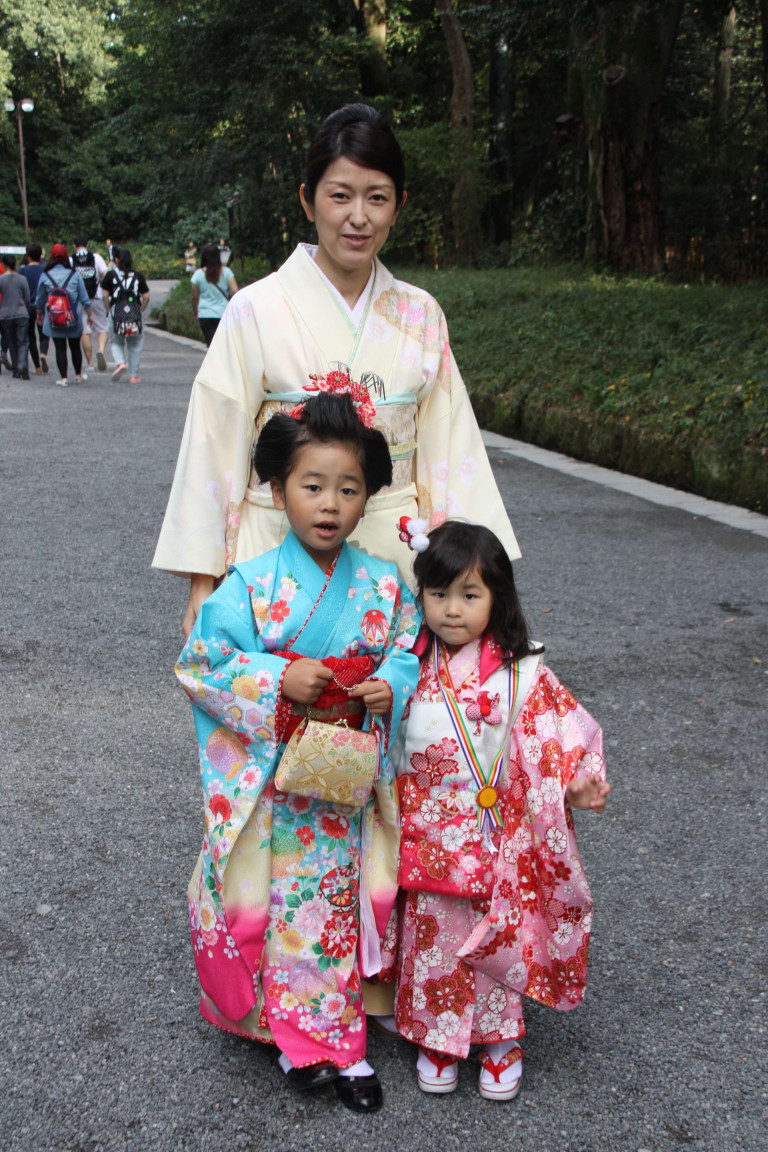 A family dressing up when visiting a shrine 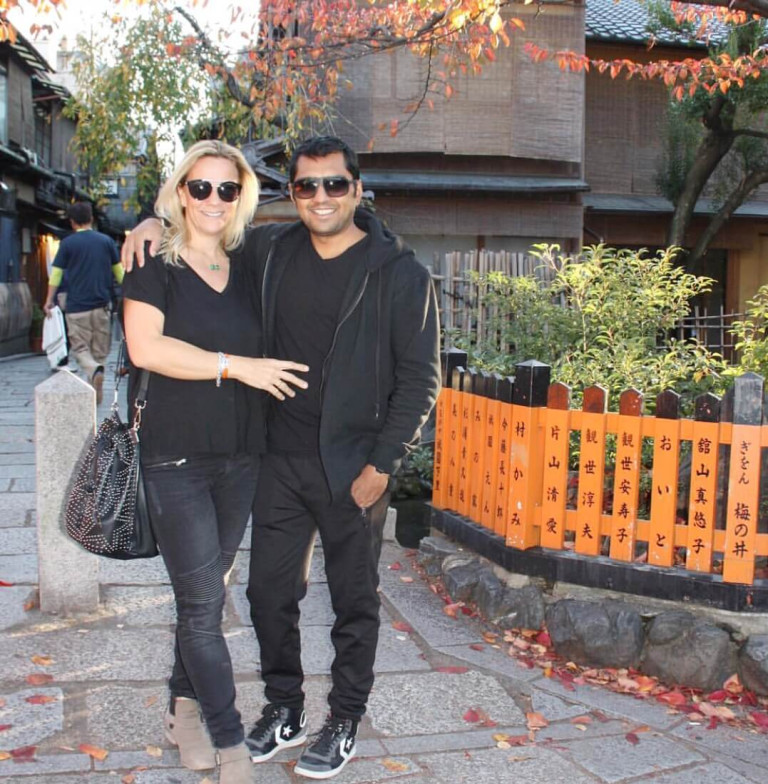 The famous bridge from the movie 'Memories of a Geisha" 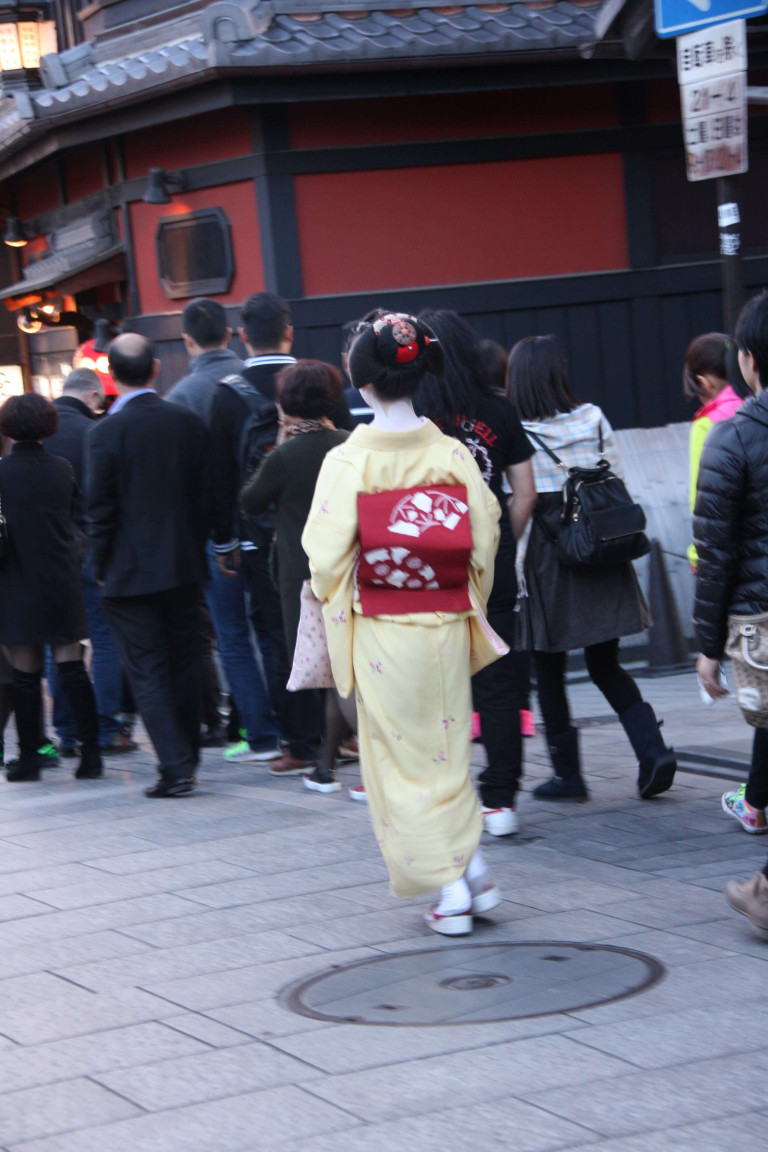 Another "real" Geisha who I tried to chase but she was too fast and was lost in the crowd. 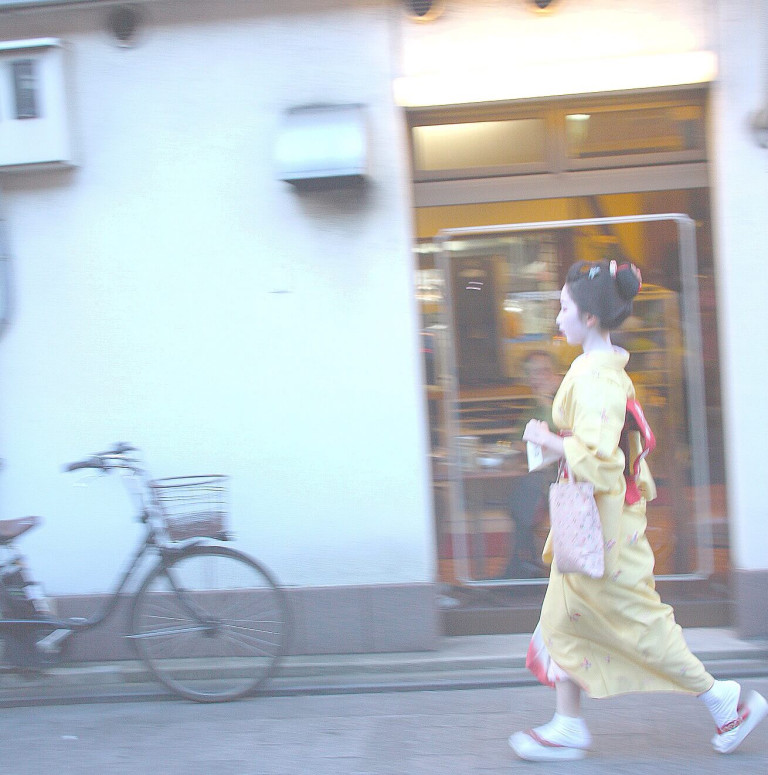 This is the actual geisha I chased to get a pic! 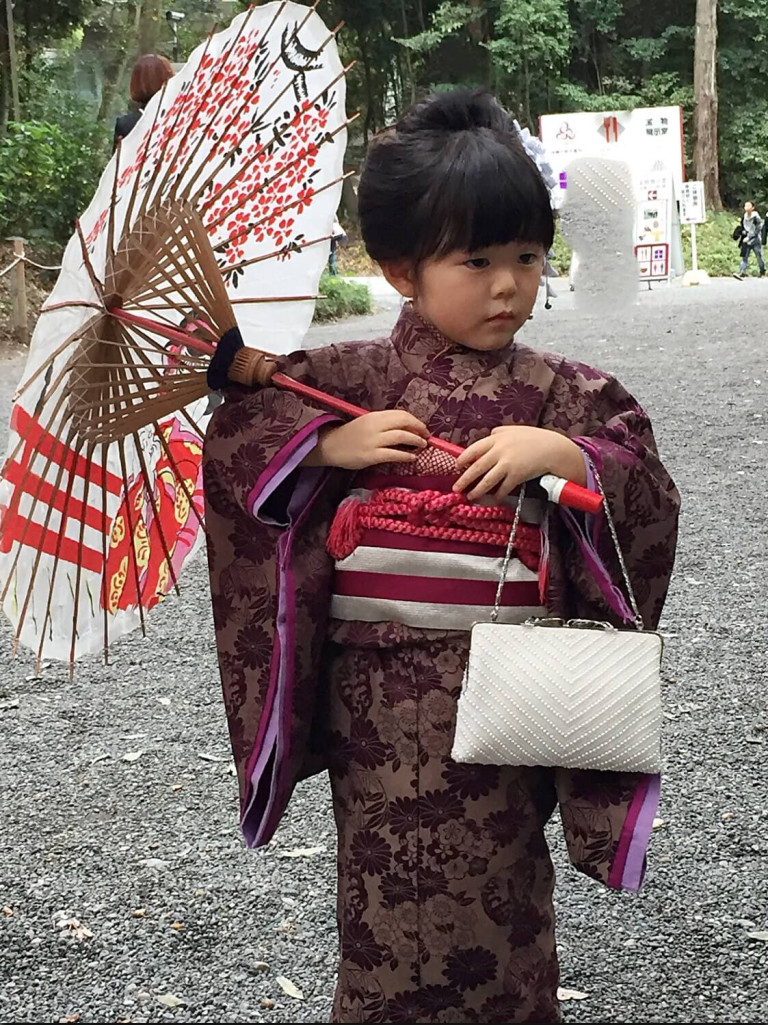 LIttle girl dressed up as a geisha 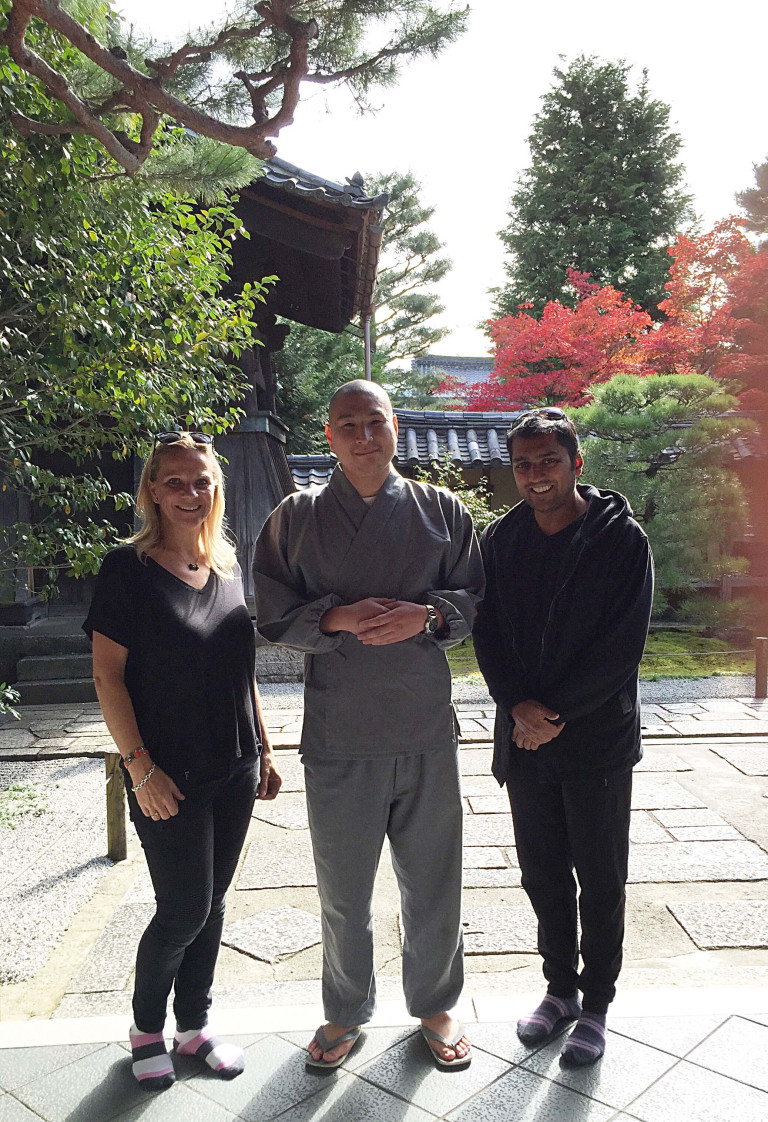 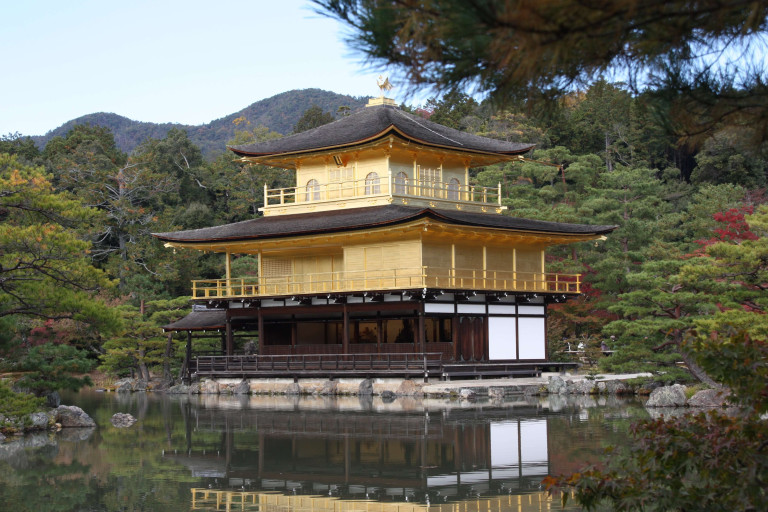 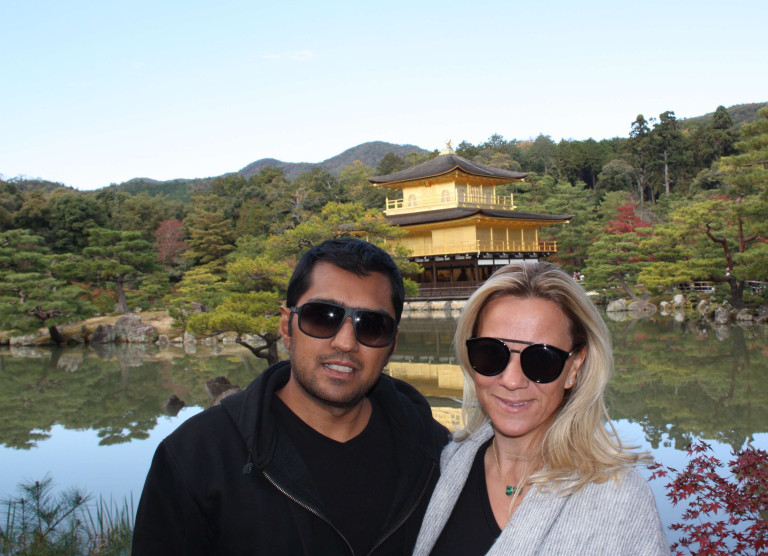 Selfie at the Golden Temple - Koyoto