Traveling is not only a way to create wonderful memories but its also a great way to showcase to the rest of the world places that people may never get the chance to visit. Its also a wonderful way to meet people from all walks of life which in turn will put your own life into perspective.

Soweto is the largest township in Johannesburg - its a city within a city.

While in Johannesburg we went on a tour of Soweto. For people that may have never heard of Soweto, which stands for South West Township – it is the largest township in Johannesburg where millions of people were displaced to during the apartheid era and is currently home to 2 million people living in a diverse environment.

The establishment of Soweto is, like Johannesburg, linked directly to the discovery of Gold in 1885. Thousands of people from around the world and South Africa flocked to the new town to seek their fortunes. Within 4 years Johannesburg was the second largest city. More than half the population was black, most living in multi racial shanty towns near the gold mines in the center of the town. As the gold mining industry developed, so did the need for labour increase. Migrant labor was started and most of these workers lived in mine compounds. However other workers had to find their own accommodation often in appalling conditions, with no running water, which is still apparent today.

Our tour guide was Zimmy , who lives in Soweto and he showed us the most authentic Soweto, not only did we see the tourist areas but we also saw the under belly of a city that suffers from crime, poverty, drug lords and prostitution.

Soweto is also famous for being home to two of Africa’s most prominent black men – Nelson Mandela and Desmond Tutu, who at one stage of their lives lived a couple of yards away from each other on the same street – Vilakazi Street. Remarkably, this is the only road in the world that has two Nobel peace prize winners, with Tutu receiving his award in 1984 and Mandela in 1994.

You can take a tour around Mandela and Winnie’s house known as ‘8115’ where he lived with his two children  in 1946 – 1990 – this was just before his incarceration on Robben Island at the age of 50.

Mandela spent 27 years in prison and was released at the age of 77 after which he became president of South Africa at the age of 80 years old. What a man, what a story and what a legend! Even though he was 80 years old,

and despite all his struggles and hardship, he still had such strength, will power and a message he wanted to send the world.

Sadly you cannot go into Desmond Tutu’s house as of yet as some of his family still live in the house, however a large plaque outside on his wall, honors his legacy.

As you can imagine this particular Vilakazi Street has become a bustling tourist area. Close by this area is also the museum for Hector Pieterson who was a South African schoolboy aged 15 shot and killed during the Soweto uprising  when police opened fire on students protesting the enforcement of teaching in Afrikaans.

A news photograph of the mortally wounded Pieterson being carried by another Soweto resident while his sister ran next to them was published around the world. This brought this brutal situation to the forefront of all media on a global scale. The anniversary of his death is designated ‘Youth Day’ when South Africans honor all young people.

Driving through the streets of Soweto, we couldn’t believe how diverse it was with many run down properties, wrought iron shacks as homes and then one area where the wealthy live in large gated houses, with cars and they even have manicured  gardens. Even though these people now have money – Soweto is their home so they haven’t moved out, but this has caused friction with all the other, less fortunate residents.

During our tour we stopped at a corner bar, where locals were chilling and enjoying a beer. There was a group of ladies all dressed in black who had attended a funeral earlier that morning. For approx. 20 Rand (AED5) you get a liter bottle of beer - no surprise that alcoholism is rife. A poster on the wall caught my attention

‘Fire arms free zone’ even though you need a license to carry a fire arm, people carry them for safety and self defense living in such a dangerous area.

After the bar we then headed to an area where Zimmy our tour guide lived called Kliptown.

Kilptown is a massive informal settlement where thousands live in abject poverty. Residents call it ‘the place history forgot’. The people living in this area are approx 55,000 in number – however they are subject to widespread unemployment, illegal electricity connections and exposed sewage as part of their daily lives. There maybe a couple of portable toilets in the streets but they have been there for years which have most probably never been cleaned. Rumor has it that its common to find a fetus inside the loo as there’s no running water so it gets blocked (devastating)

Kids as young as 2 are roaming the area alone or with other young children and many of the youth hang in the streets as a way to pass the time. What is great to see if the amazing artwork/graffiti on all the walls, as spray paints have been donated to the community. We actually took a lot of paint bottles as we were informed that some of the youth want to create a wall dedicated to women!

Zimmy, who was our wonderful guide, is 29 years old who 9 years ago meet a guy called Bob while he was living on the streets in the city but still managing to attend college.

Bob brought Zimmy back to Kilptown, where he later adopted him and whom he has educated and trained him to be a tour guide in Soweto and also trained him to run the local youth centre and become a social entrepreneur, educating the people with in the community.  Today Zimmy is engaged to a lovely woman who helps him run the youth center and he has a two year old daughter. It was wonderful to meet such a person with strength and determination who wanted to change his life around, get an education and defend for himself. Zimmy is extremely eloquent, and knowledgeable who if given the chance would make a great trustworthy employee and maybe even one day run his own successful business.

This brings me to Bob - who is known as the “Mother Teresa” of Kliptown. For 32 years he has been helping the youth and people in his community. His message is to encourage people to work, get an education and make people understand that you have to work for what you want and need in life and not to expect it to be handed to you. Bob has adopted many children and young adults even though he can’t financially provide in the way we know how, his selfless acts of love provides a nurturing family environment- this touched my soul as love makes the world a better place.

I admire Bob so much as his selfless acts of kindness are providing compassion. hope and opportunities, allowing the youth who recognize it, the chance to make a better life. With a slim build and long dread locks, Bob invites us into his home within the youth centre. It has a small room (bedroom/sitting room) and kitchen which he opens to anyone and everyone.

There’s a group of kids in one corner singing to the guitar and a family in the other corner mourning the death of their 80 year old father who died a couple of hours earlier that morning with Bob being the one to assist with the funeral and the youth centre a place where the community can come together.

Bobs love for his community is evident along with his spiritual drive that sustains his work and his daily message. Bob is one of those genuine people that are angels living amongst us.

The youth centre is small but is the pulse of this unbelievably run down area, with two toilets that Bob himself cleans and maintains. They have running water, loo paper and a bath mat – it’s the little things like this that go a long way.

Children as young as 2 run freely in and out of the youth centre to chat to Bob and Zimmy as they know everyone who lives in the community and their personal story.  One little boy just wanted to be held and hugged by us all - his mum an alcoholic clearly overwhelmed by her day to day life, can’t manage her son and neglects him. I managed to catch on camera this little boy and a few other boys, no older than 4 years old dancing, their faces beaming with smiles and laughter, living in the moment, with not a care in the world or the circumstances around them.

I am always brought to tears and humbled by meeting such selfless, kind and socially entrepreneurial people. I have visited similar areas in Dhaka, India and Pakistan and it’s evident that such communities are run and supported by angels like Bob.

It doesn’t matter where we come from or what we have in life it will always come down to three things – love, food and a roof over our heads - anything more and we really do live like kings.

Traveling is the window to life, an opportunity to learn and share stories.  Whatever we have in life we have everything - be grateful, be humble and thank your lucky stars that you have a place to rest at the end of every day and food to eat. 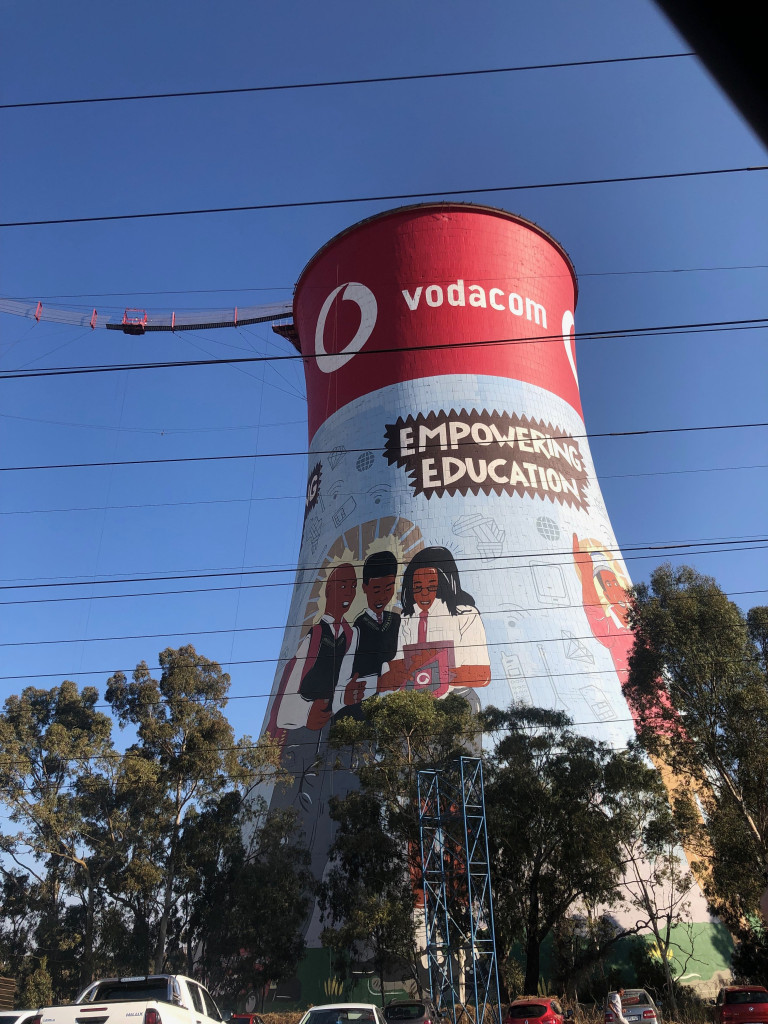 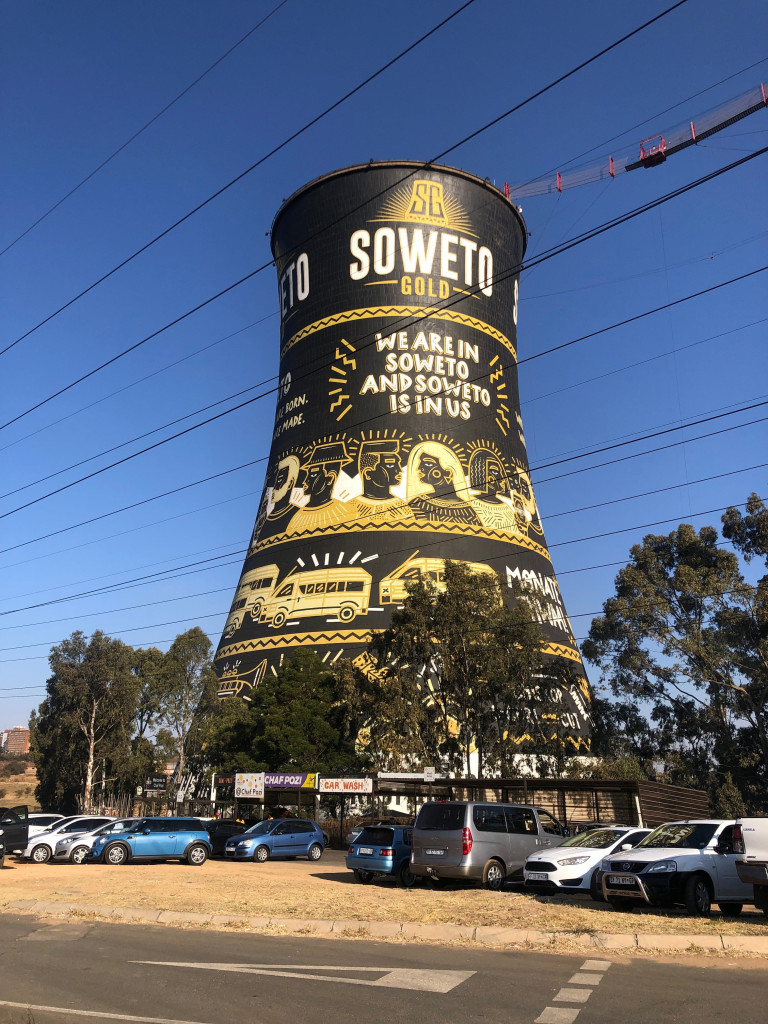 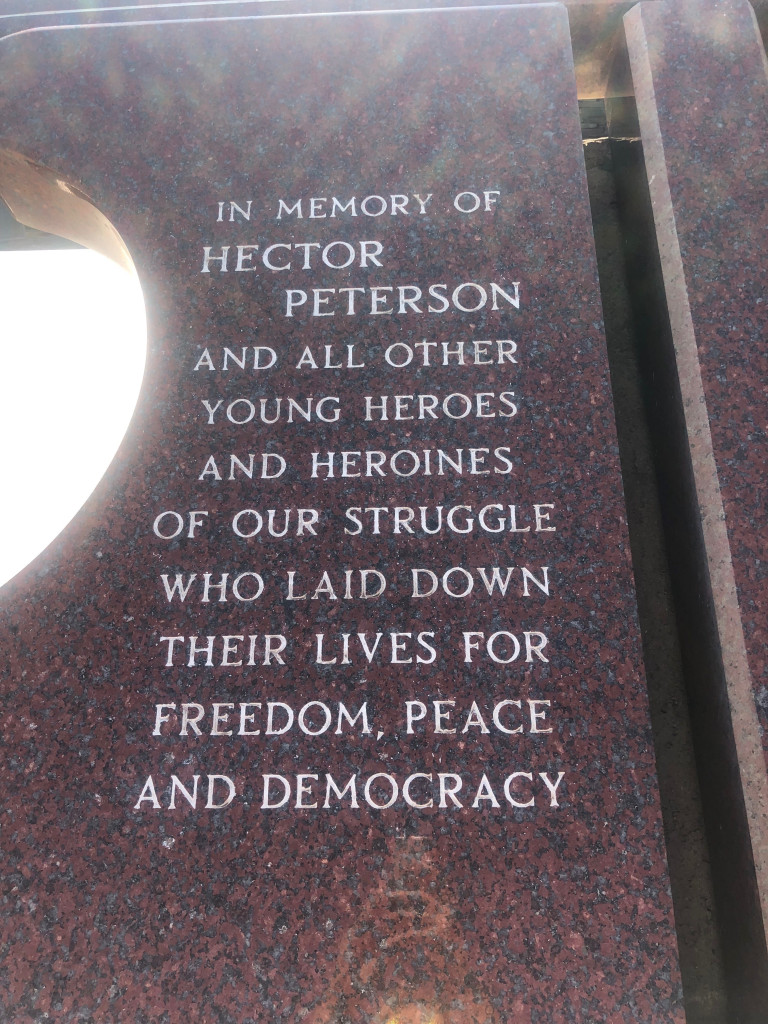 In Memory of Hector Pieterson 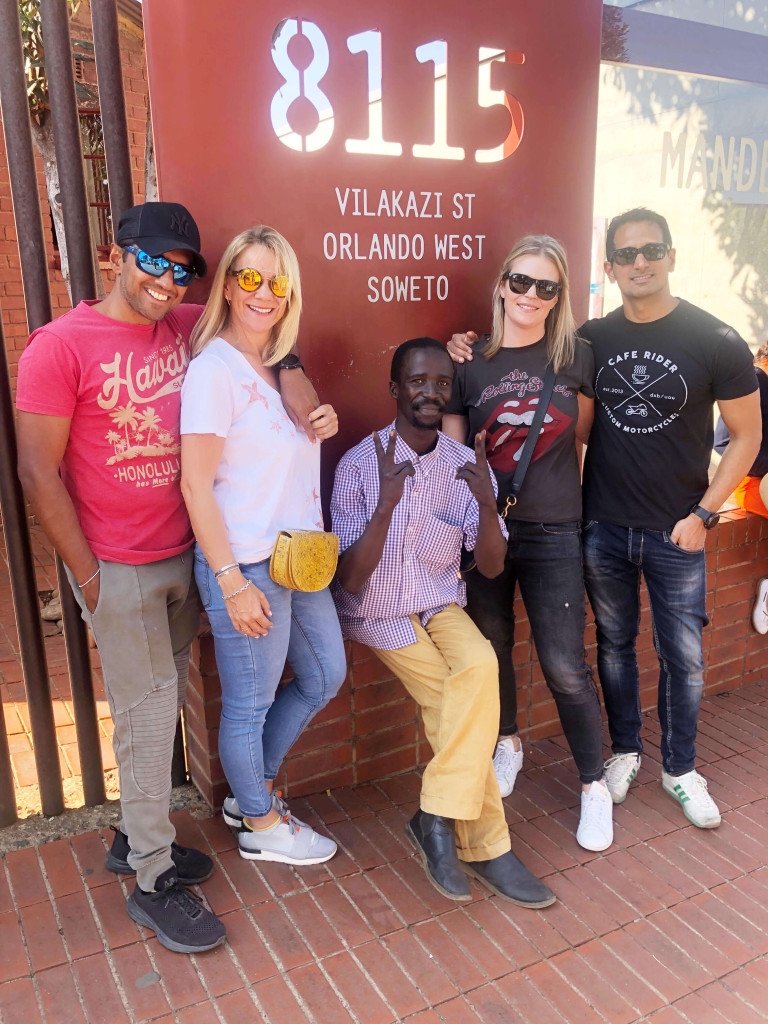 Outside Nelson Mandela's home in Soweto 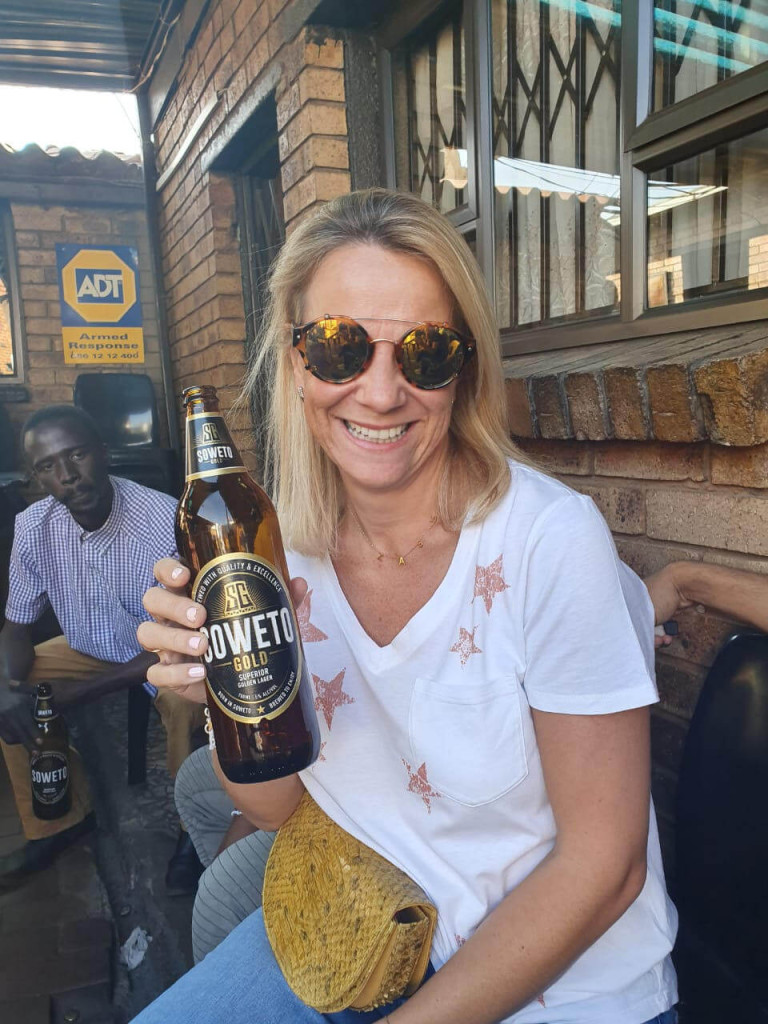 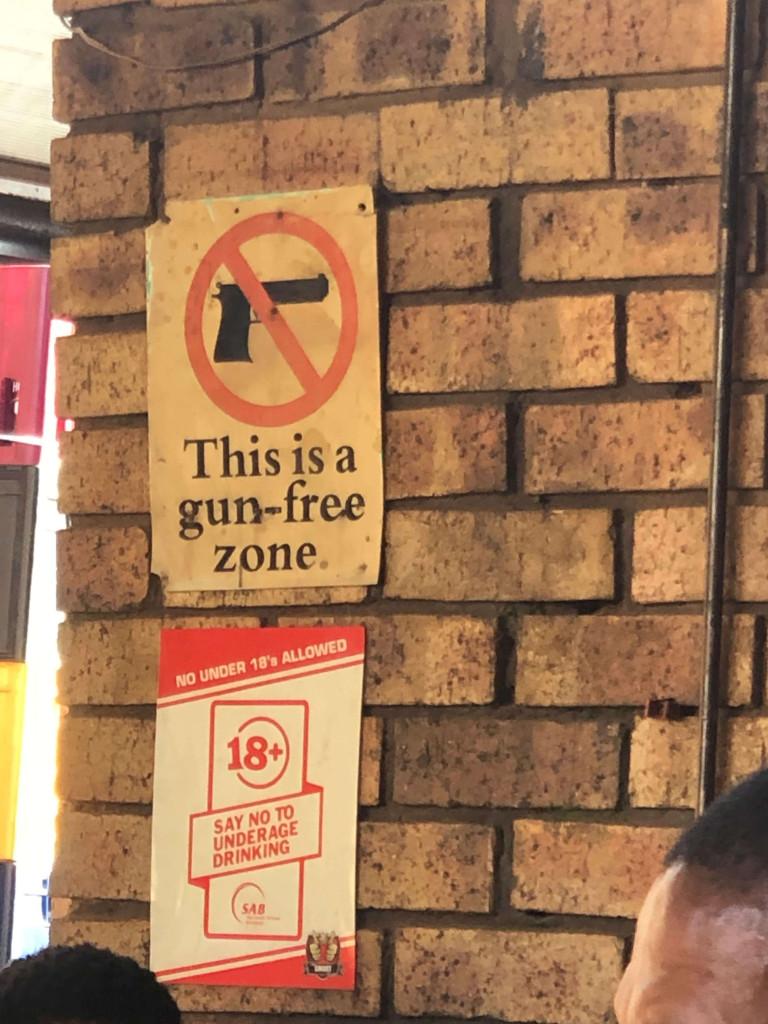 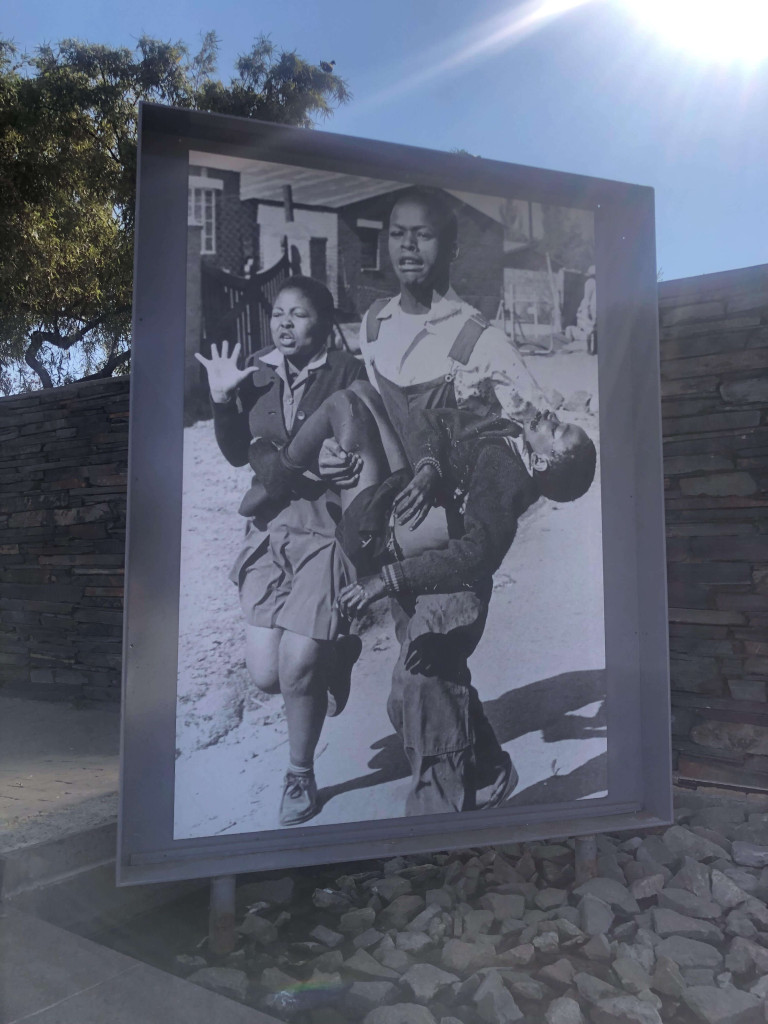 This is the picture that caused world wide media attention

The plaque outside Tutu's home in Soweto 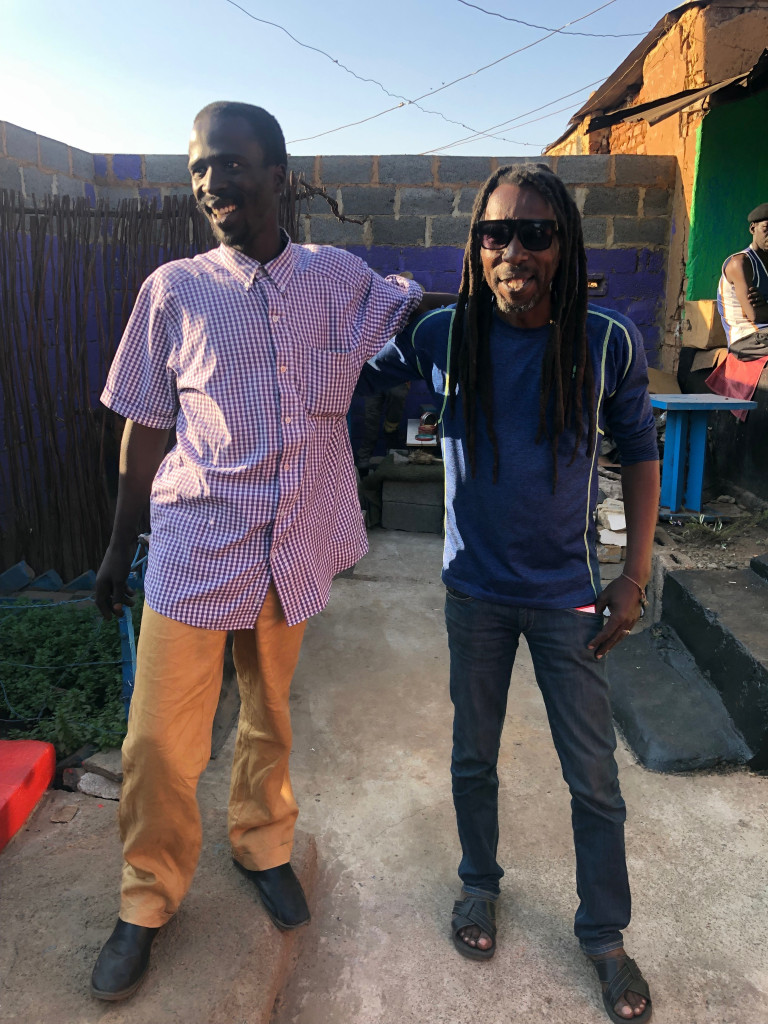 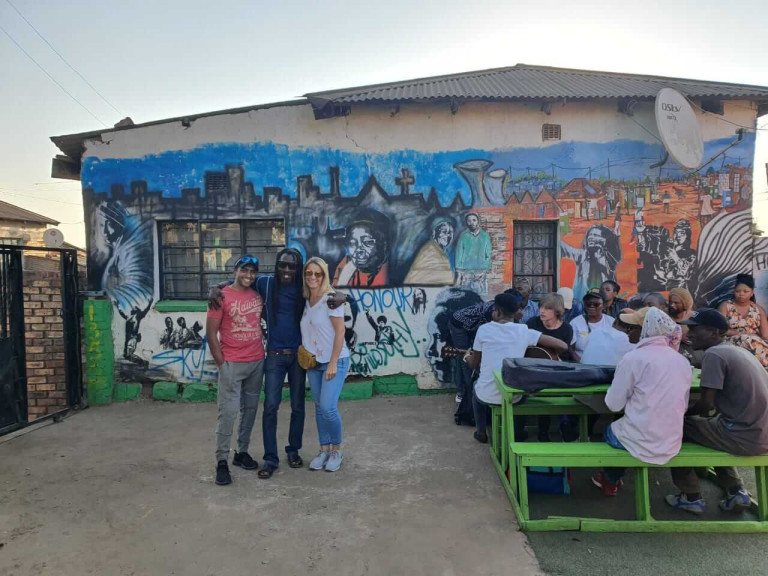 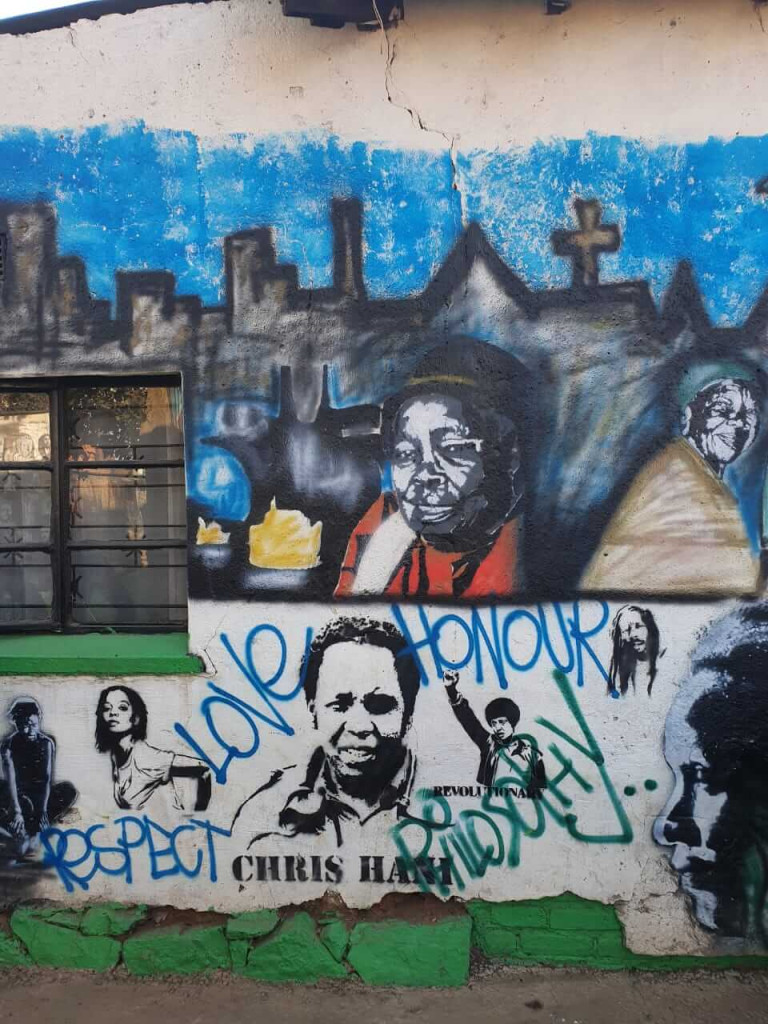 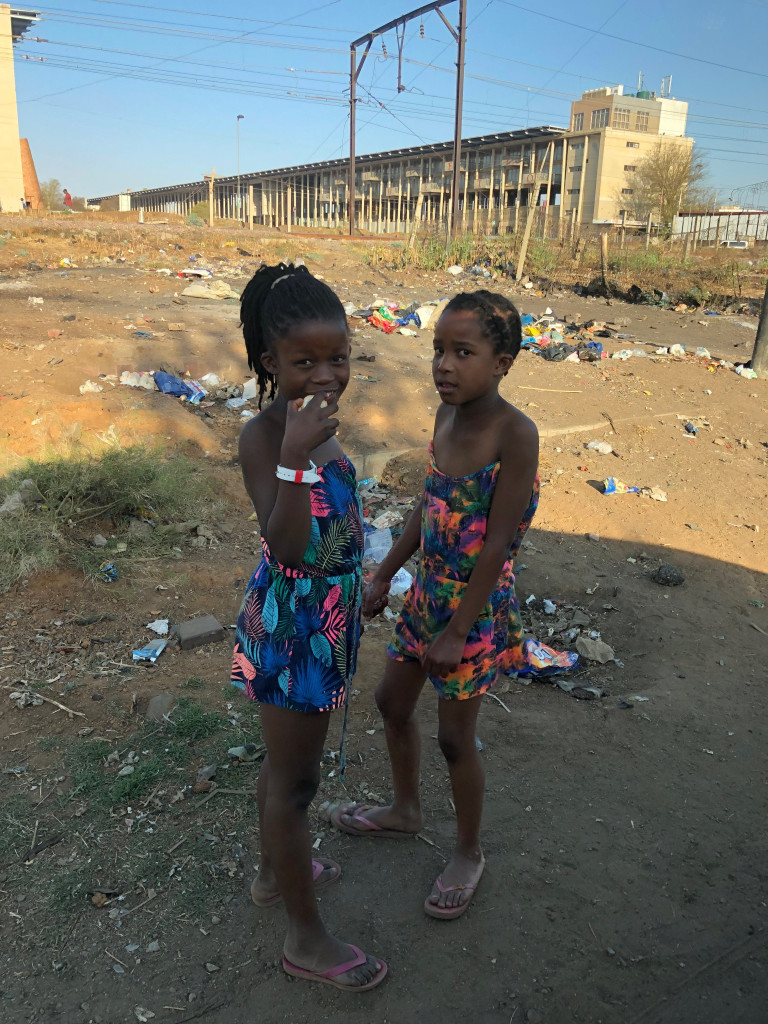 Young girls on the streets of Kliptown 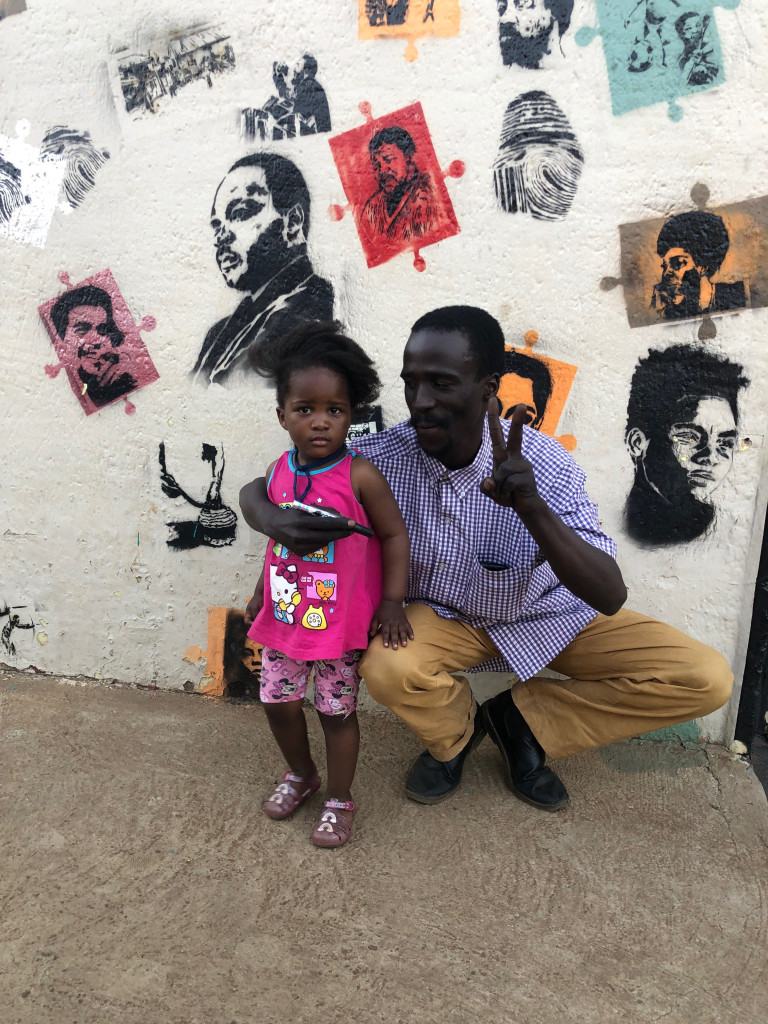 Zimmy and his daughter 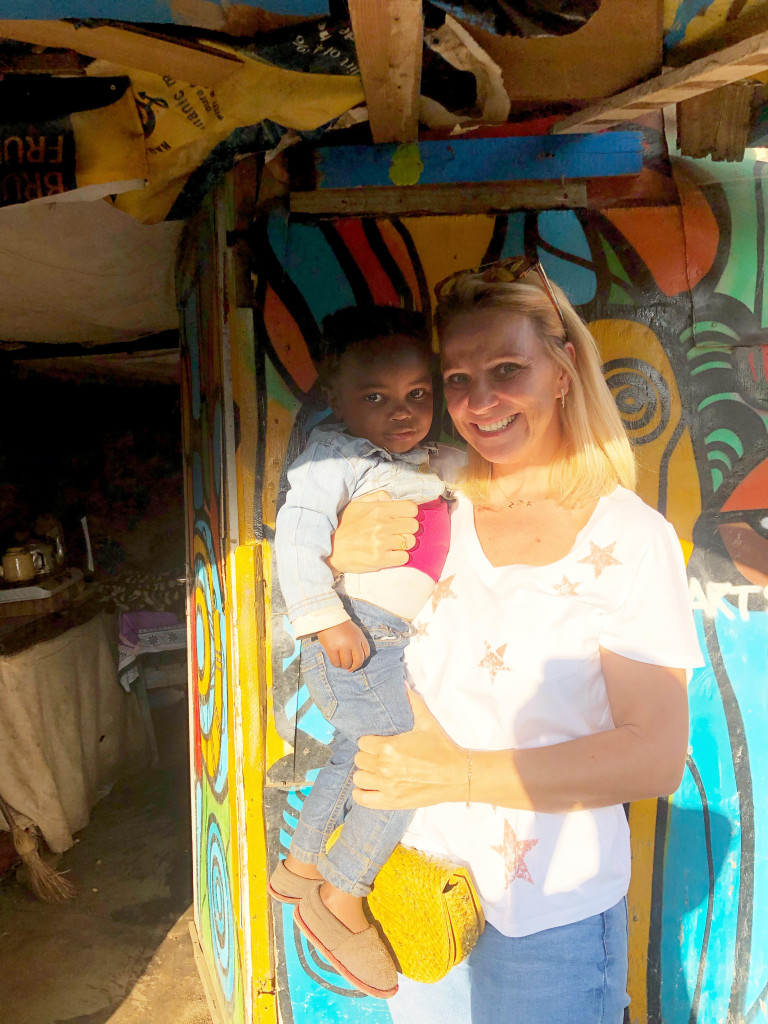 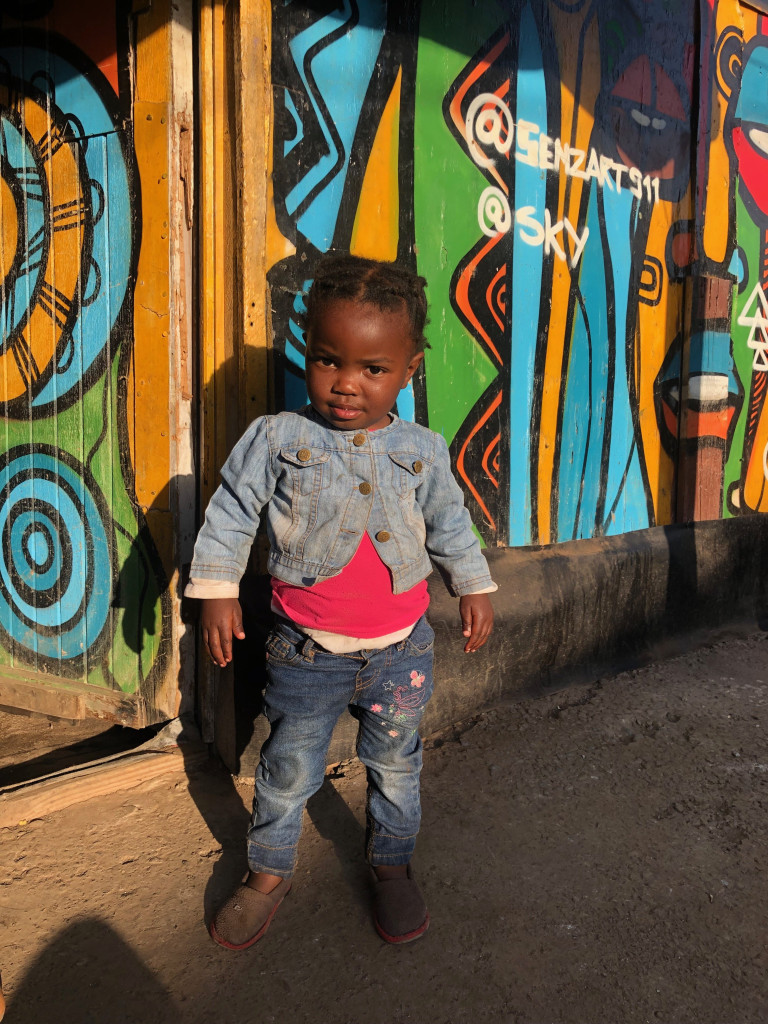 How cute is this little one?! 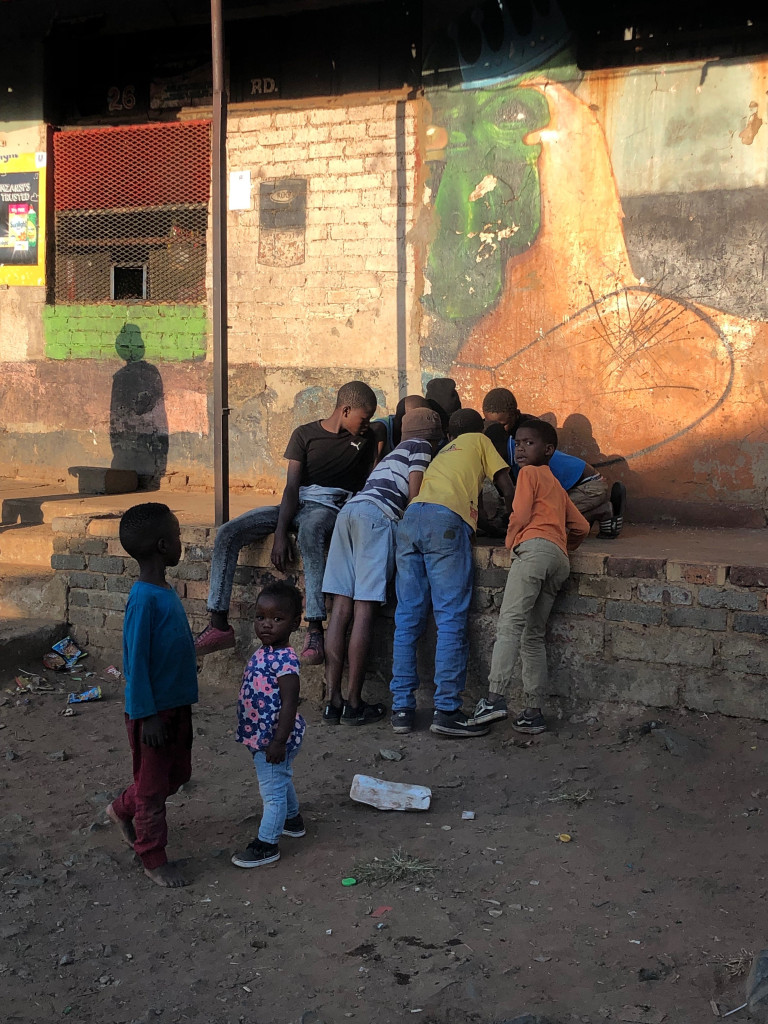 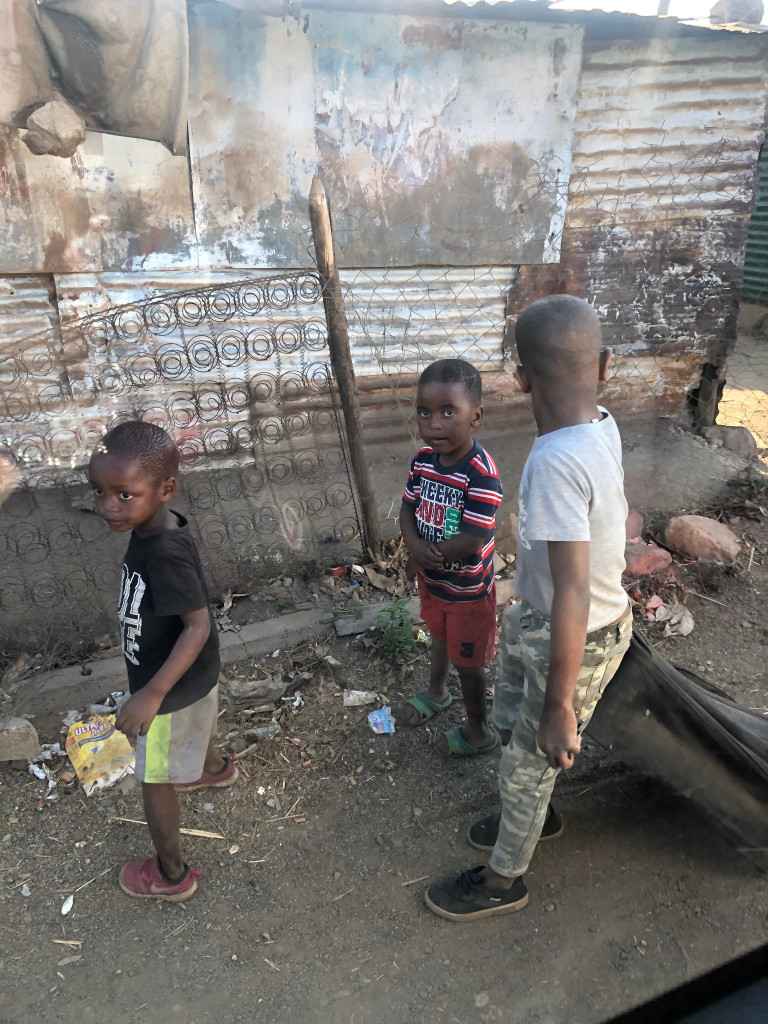 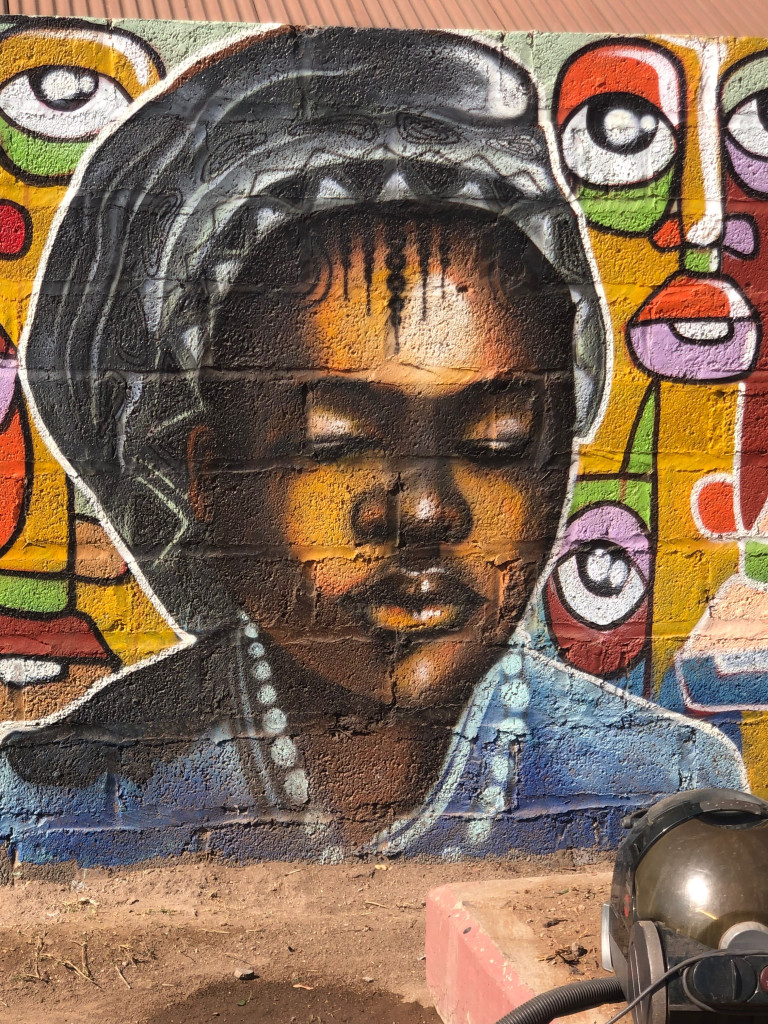 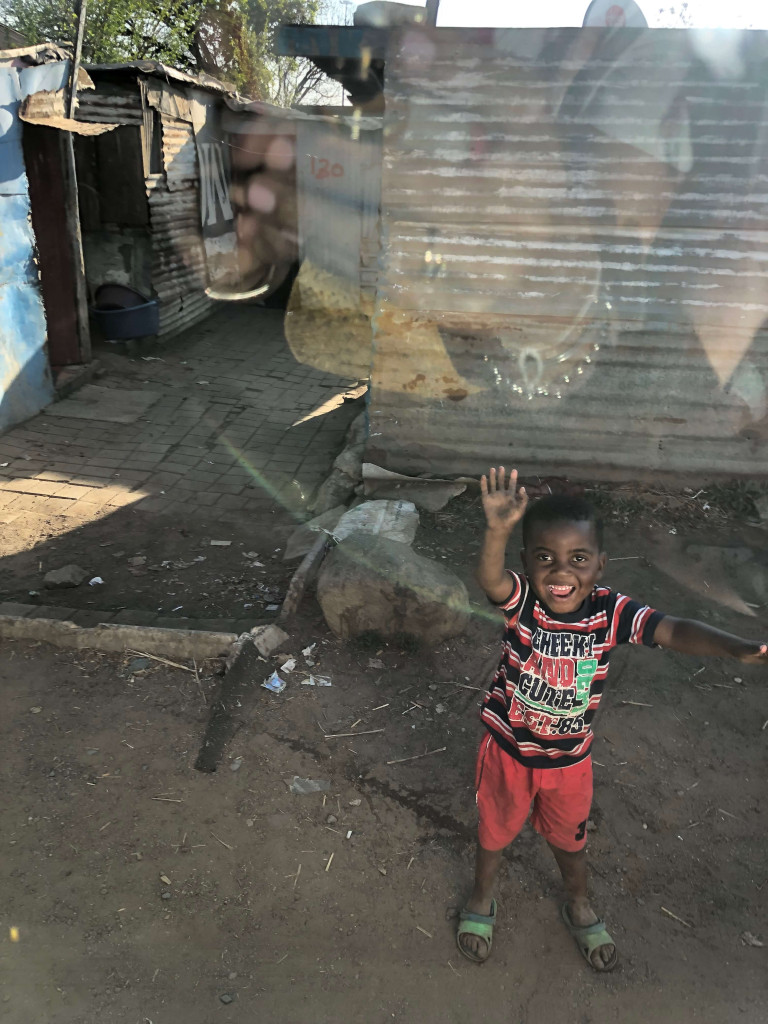 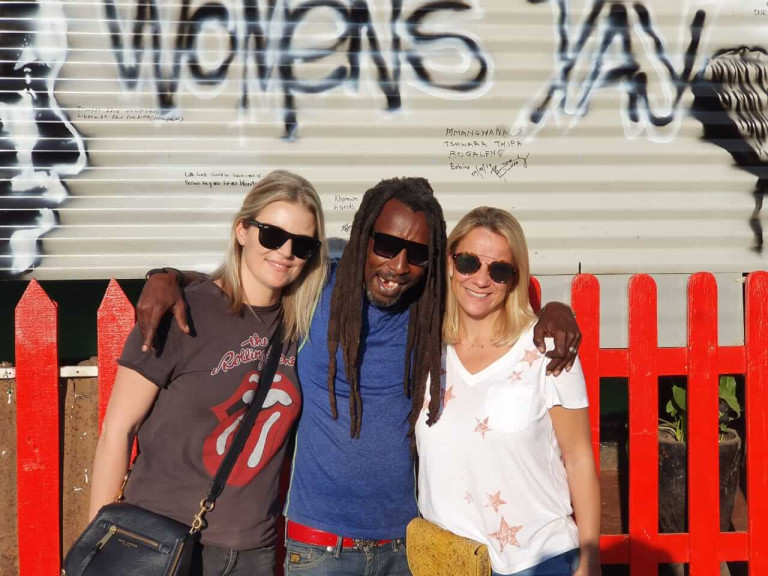 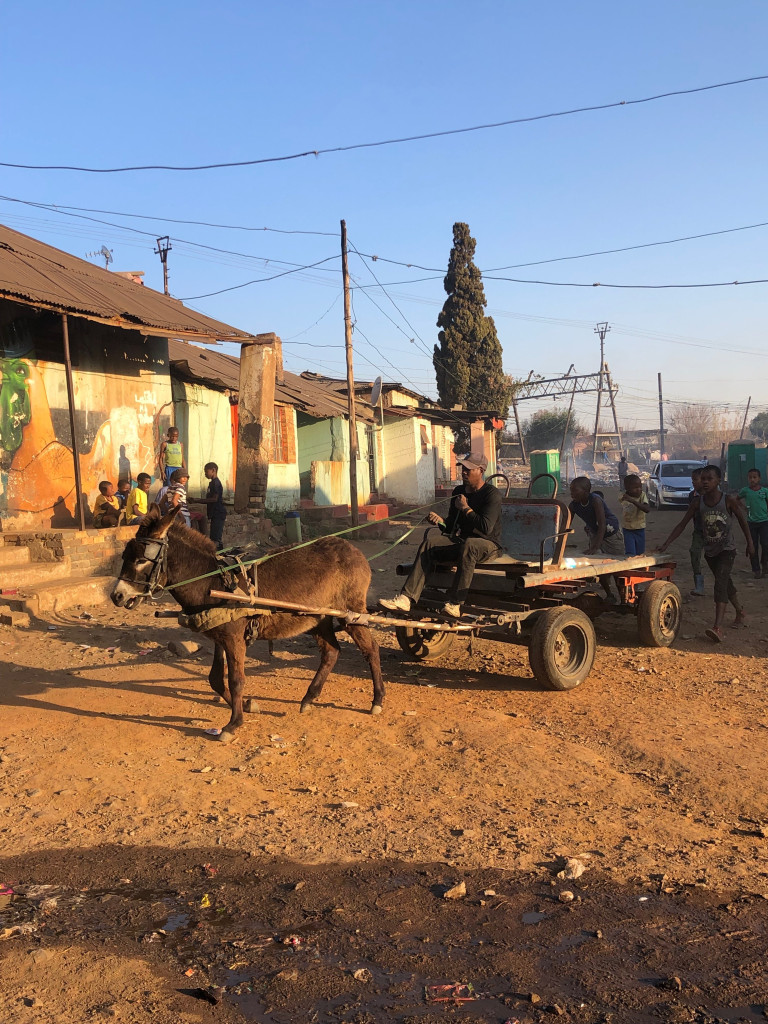 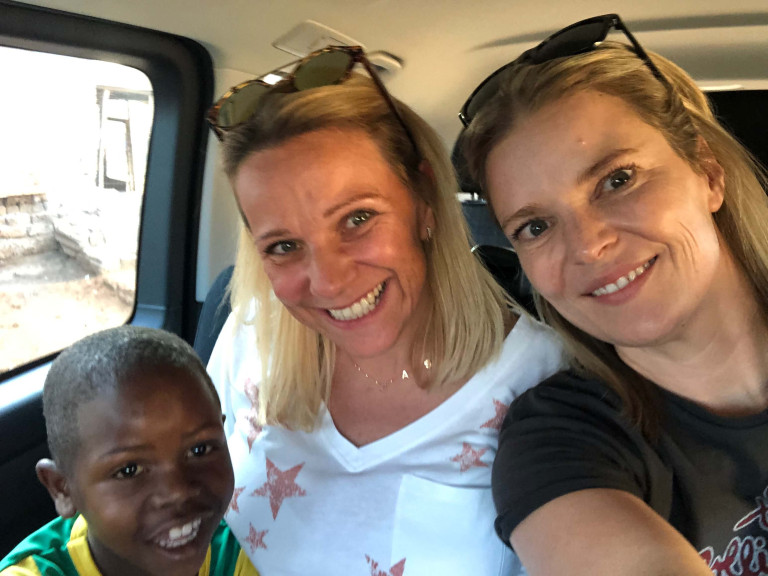 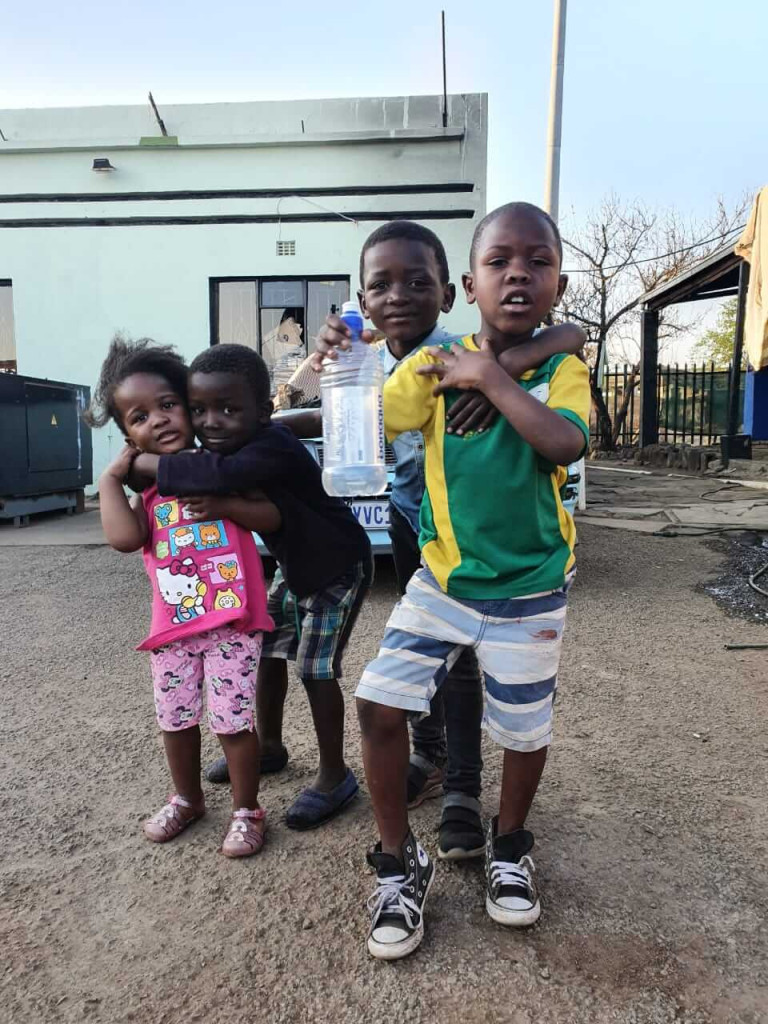 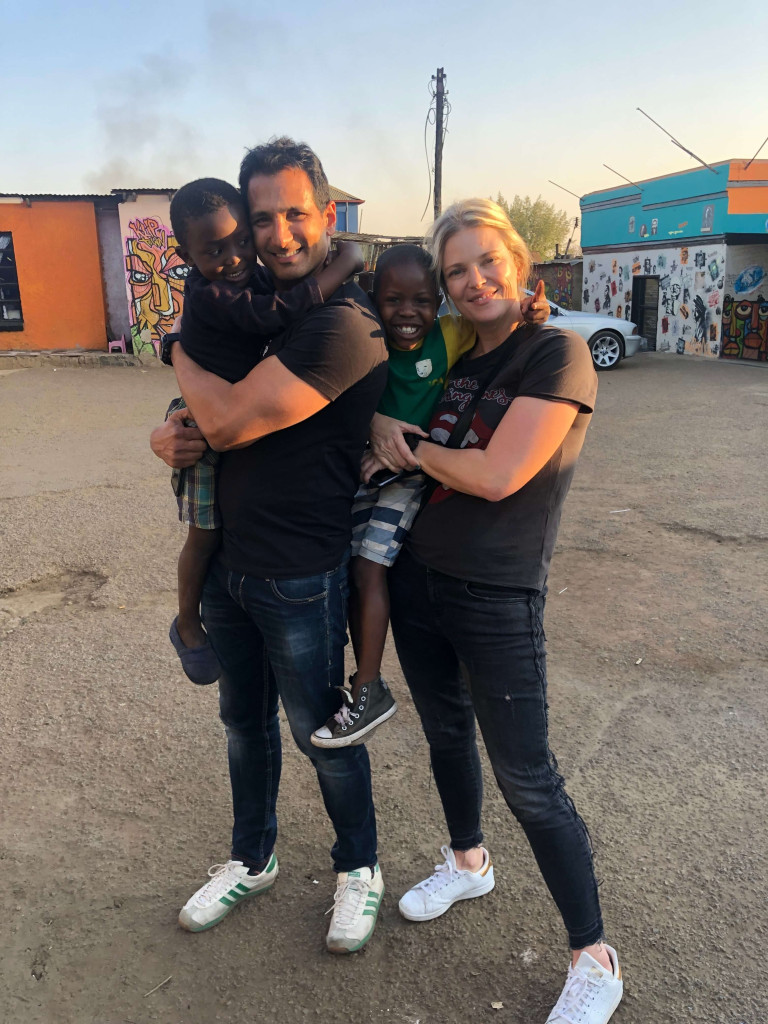 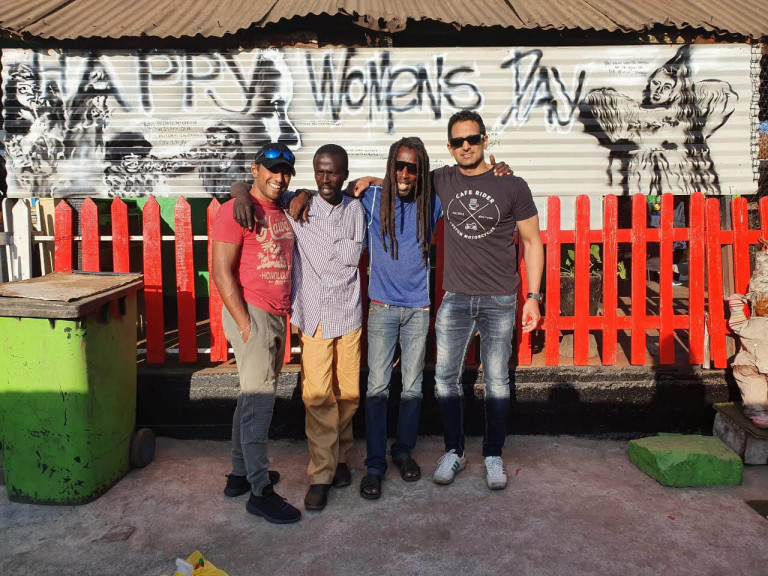 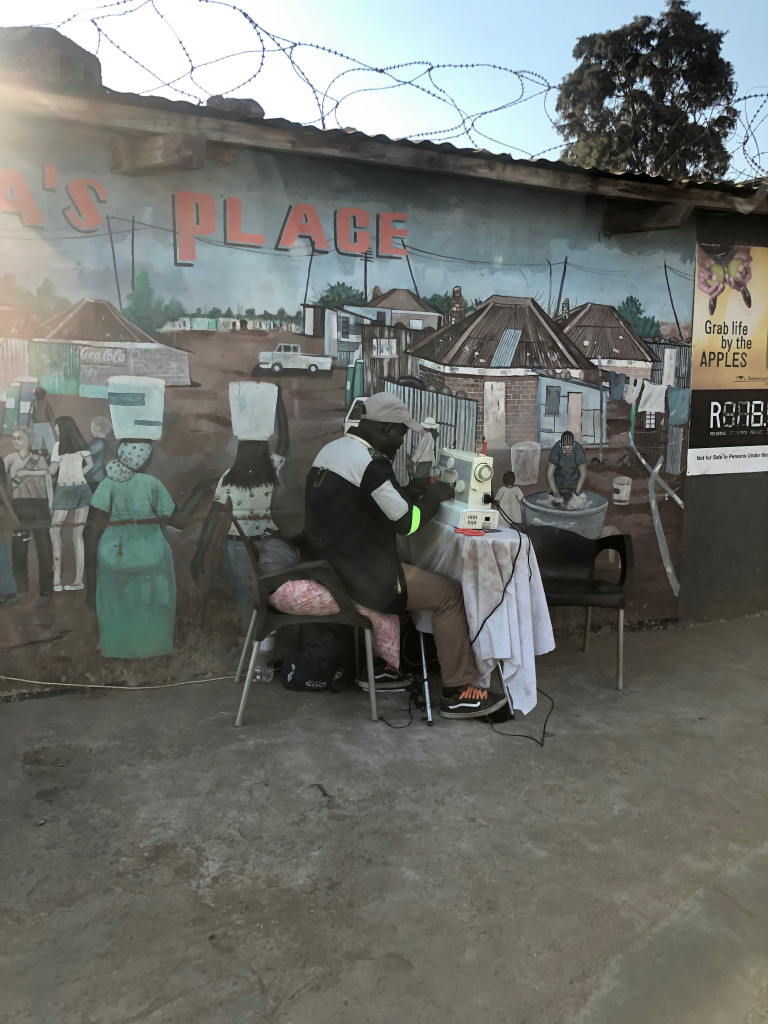 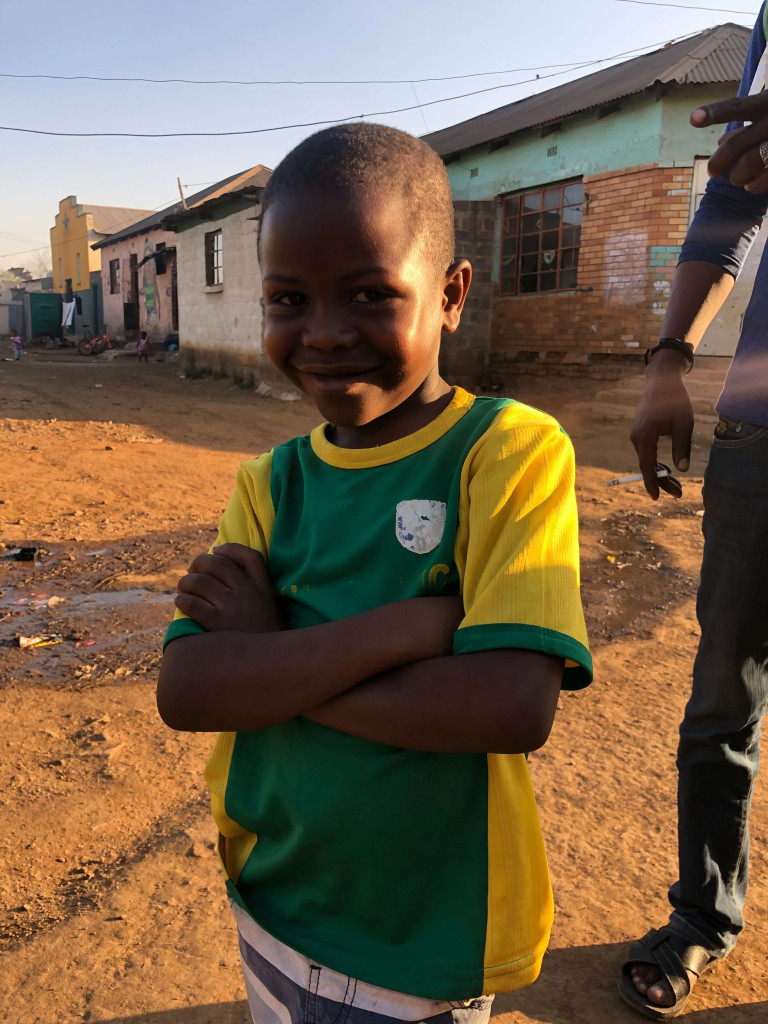 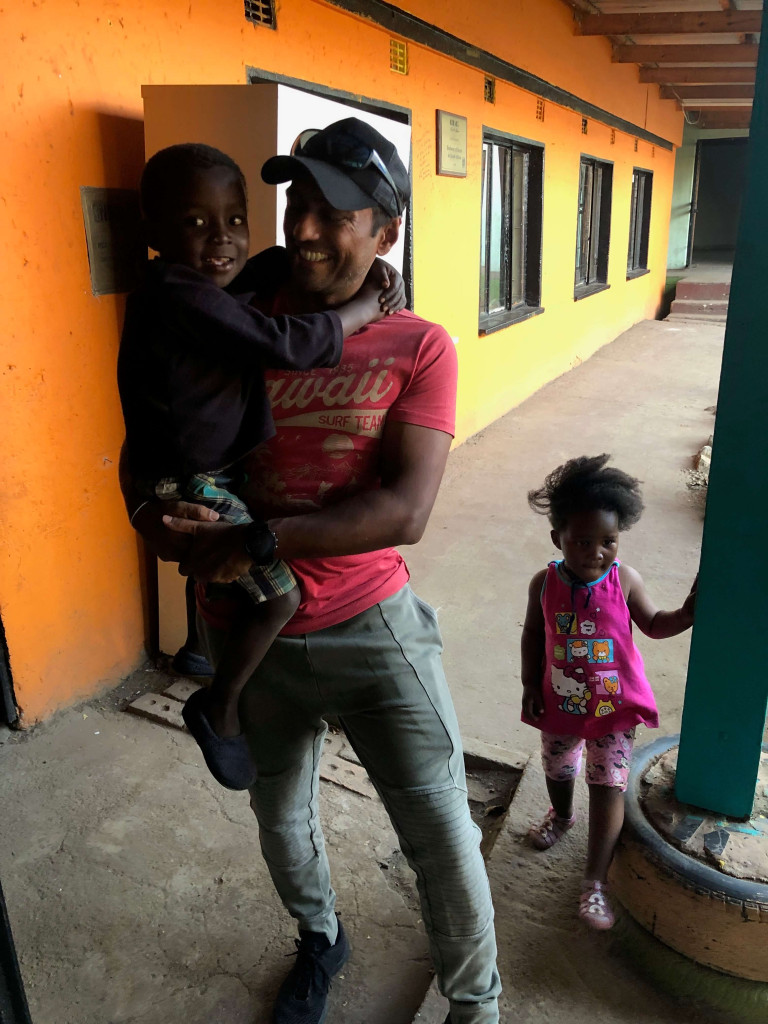 This little boy just wanted to be held x