I can’t take any credit for organizing this great trip in Barcelona as my good friend Azee arranged everything for her husband’s 40th Birthday celebrations. Even though I have been to Barcelona a couple of times, this visit ticked every box from partying at “Off Sonar” (a very popular annual dance festival), dining at the best restaurants, a yummy picnic in the park, a history lesson while cycling around the city and to top it all off we were a great group of friends who laughed and danced our way through the trip together.

Passeig de Gràcia is one of the major avenues in Barcelona – its perfect for shopping, dining and also home to one of Gaudi’s masterpieces, Casa Batlló. A stone’s throw away from this major tourist attraction is the minimalistic and elegant Hotel Alma. The beauty of this hotel is that even though it’s in the middle of the city, it has a large stunning manicured garden area for dining and a cozy, roof top garden for drinks. The property is more of a sophisticated adult retreat than a family hotel, but saying that it does cater for kids upon request. All the rooms only have fingerprint locks for instead of room key; shutter blinds for curtains and the interiors are neutral and masculine toned. For the best view I would suggest requesting a Grand Deluxe room as they offer views of Gaudi's iconic wavy-stone La Pedrera building.

Like every major city worth its weight in gold, Barcelona is packed with its share of amazing restaurants offering tantalizing tapas, al fresco dining or unique cuisine nooks hidden away in buildings filled with history, stunning designs and wonderful architecture. If you, like me, find it difficult putting together a list of places to go, simply due to being scared of missing out on anything, here’s a few recommendations:

Tickets Bar is number 25 on the ‘Top 50 restaurants in the world” list – a very cool tapas concept and designed like something out of Willy Wonka’s world. Especially the desert room, imagine hanging strawberries and candy canes from the ceiling!! Its not an easy restaurant to book as it has a long waiting list and you can only book a table the same month you plan on visiting

Jaime Beriestain a modern yet sophisticated coffee shop, cocktail bar and concept store designed by Jamie Beriestain himself. It’s a local hangout and a must visit for tourists.

Barcelona Tapas tour by bike organized by Barcelona by Bike is a “Must Do’ as it’s the best way to see Barcelona, from the parks to the port, inside the windy narrow streets and all based around a typical "Ir de tapas" (Tapas bar hopping)

Pintxos (or pinchos) are small snacks/tapas - these finger foods have an array of toppings placed on crunchy bread, spiked with a toothpick and displayed buffet style. You end up paying for the amount of toothpicks left on your plate. From savory to sweet these were simply mouth watering - add in a sangria or a cool beer and this is the perfect pick me up while biking through the city.

The bike tour was also a great way to learn more about Antoni Gaudí i Cornet otherwise known as Gaudi, the famous Spanish architect who designed the most striking buildings throughout the city. Even if you don’t know what a Gaudi building looks like, very quickly you will be able to spot one as his wacky, artistic and progressive architecture stands out from the crowd.

It’s actually a sad story. Even though Gaudi is now an architectural icon however his life was hardly easy. He was so engrossed in his work and a strong follower of god, that he let himself go - not eating, wearing shabby old clothes and never shaving. One day on his way to confession, a tram hit him, because of his shabby appearance and no ID, the 73-year-old genius was thought to be a poor beggar. He never received the medical attention he required. It wasn't until the next day that the chaplain at the ‘Sagrada Família’ recognized the old man as the famed architect, but it was too late—Gaudí died two days later, on June 10, 1926. The residents of Barcelona mourned Gaudí’s death, his funeral procession snaked through the city, ending at his immense, unfinished church. He was laid to rest in the crypt of the Sagrada Família, underneath his final efforts to finish his elaborate, colossal sanctuary. That work is still underway, 90 years later. Current projections expect the Sagrada Família to be finished in 2026, in time for the 100th anniversary of the great architect's death.

Check out this link to see the 10 must-see Gaudi buildings in Barcelona:

Picnic in the park

Picture this…a warm, beautiful clear day with a slight breeze in the air, the sun is slowly going down and while walking through the lush grounds up a hill you stumble across an area with blankets laid out, ice buckets filled with wine and basket hampers complete with tapas. This was the perfect setting to relax, reminisce about the last few days and watch the sunset over a magical city.

Getting around Barcelona is easy and quick. Uber is the best option as local taxis can depend on how lucky you are. I would suggest downloading the Uber App and using it at your convenience.

And few extra cool excursions for you to do with your family:

Barcelona has so much to offer if you or your child are obsessed with football as a pilgrimage to Nou Camp (Barcelona FC Stadium) is a must and a priority. Even though I have never done it, it’s a fantastic experience especially as it’s the 3rd biggest football stadium in the world.

Like Dubai’s version of Café Ceremique, Mosaiccos is an art studio that provides workshops on how to create mosaics with the style and techniques of Antonio Gaudi.

Soak up the sun

You can’t beat a swim in the gorgeous Med Sea. Barcelona beaches are fun and free and during the summer season they are busy right up till the sunsets. The beach next to the W hotel is a good one to visit.

Barcelona is the ideal long weekend get-a-way with Emirates flying directly into the city. 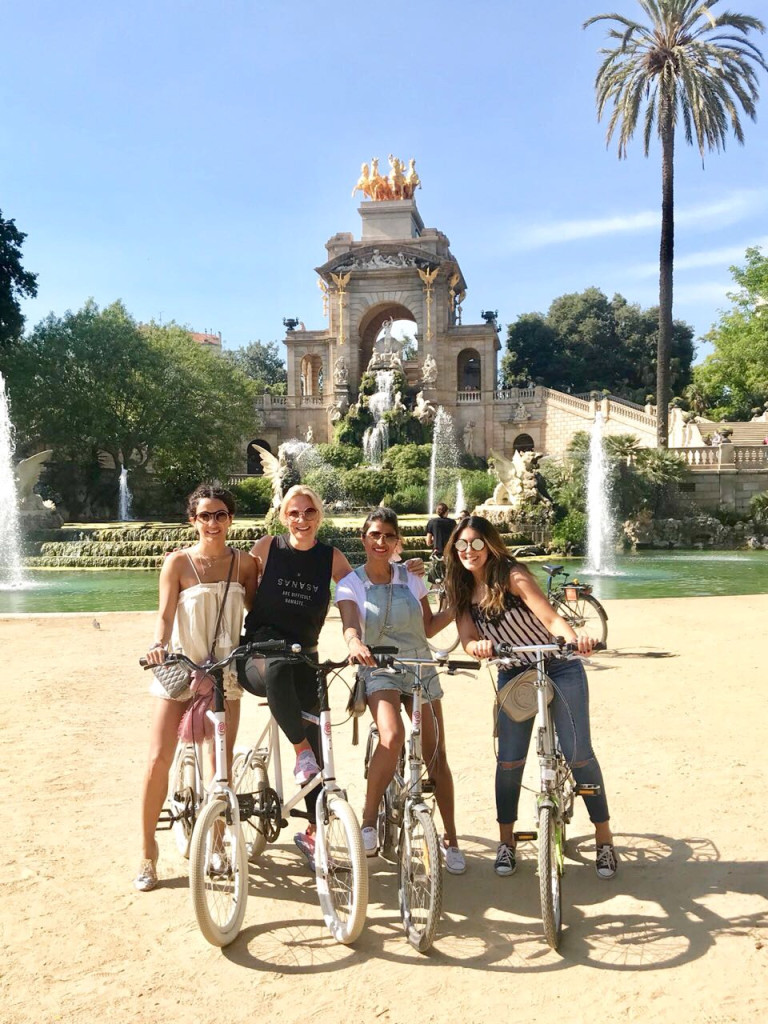 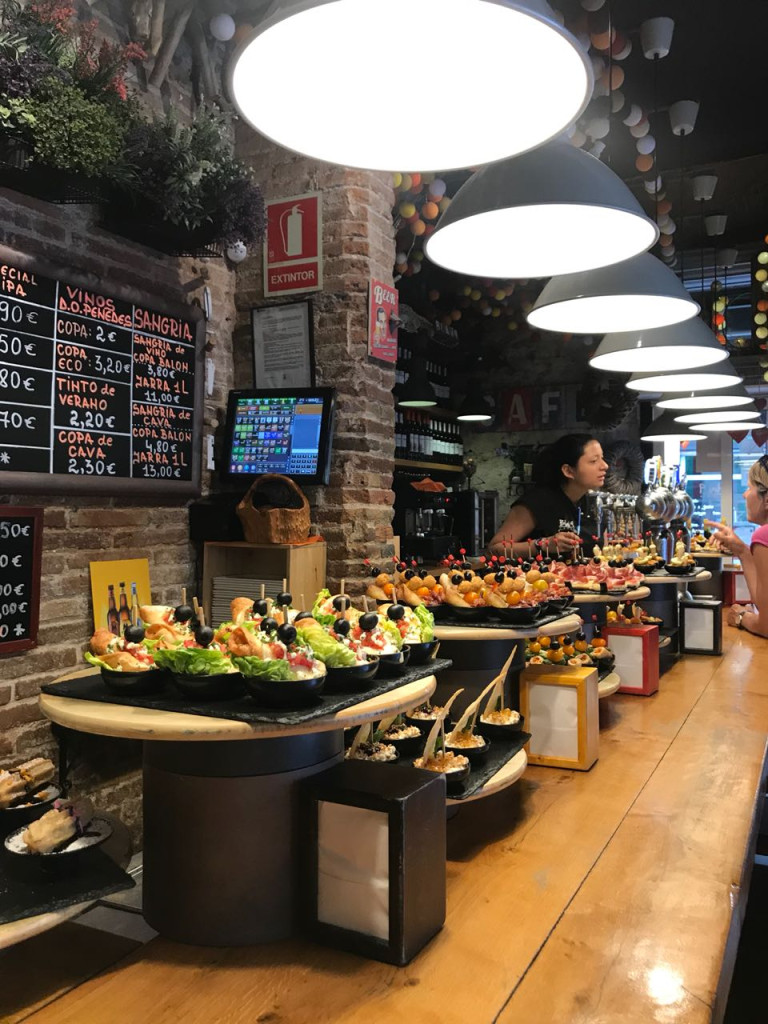 Pintxos (or pinchos) are small snacks/tapas 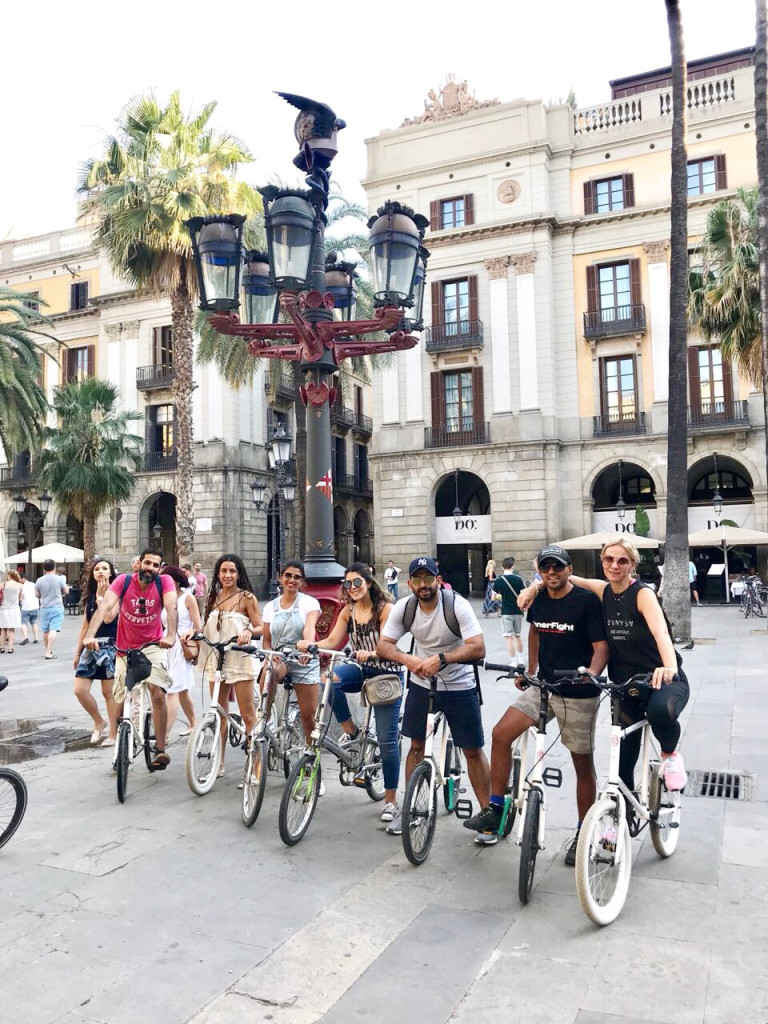 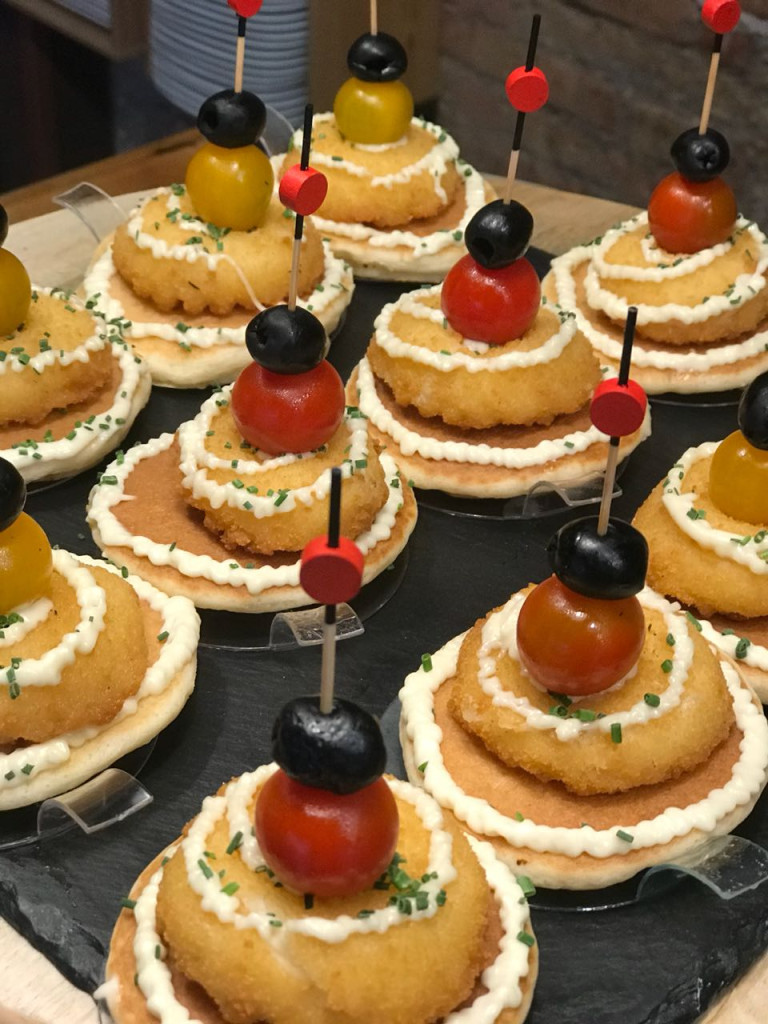 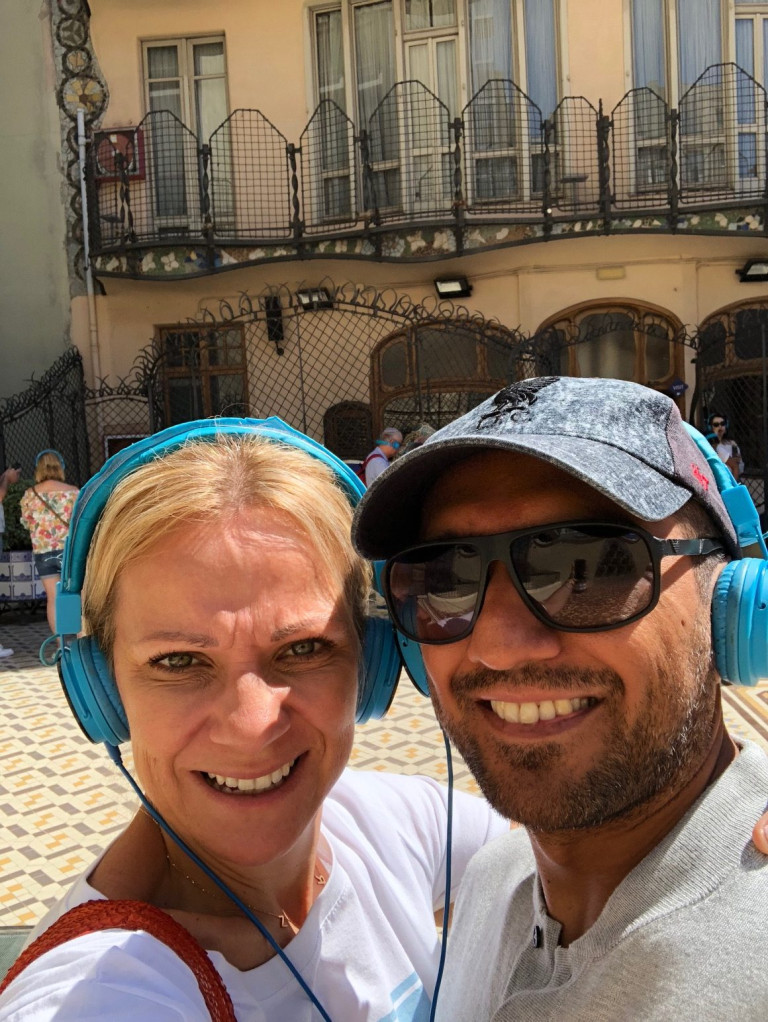 A tour around Casa Batlló 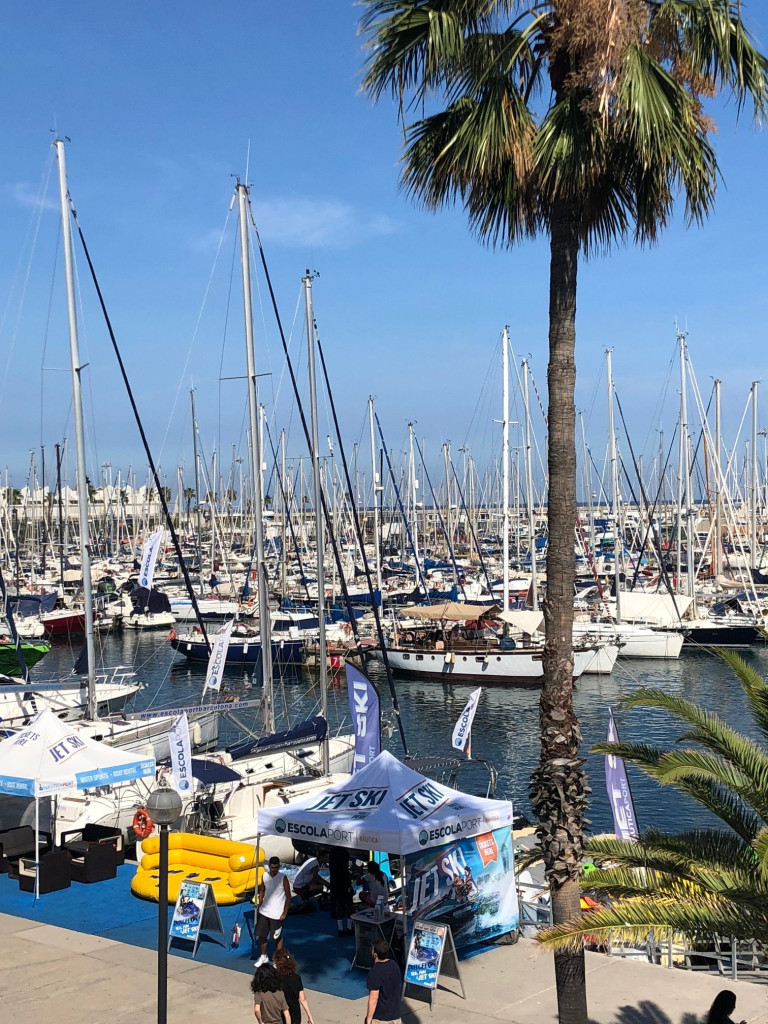 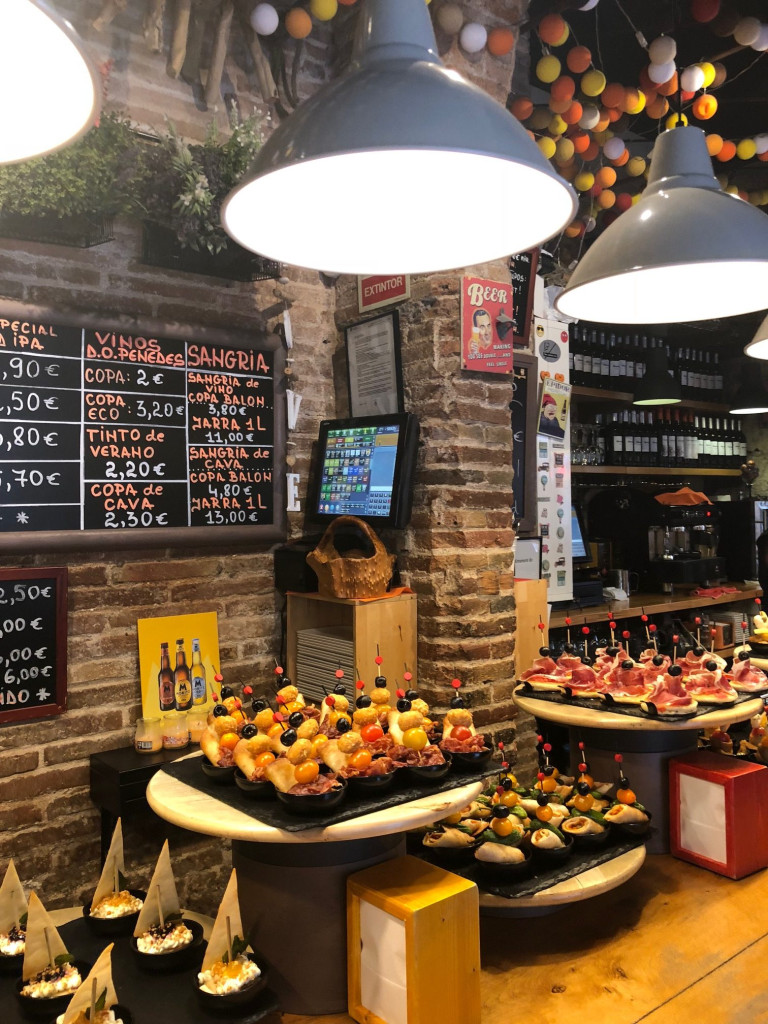